TeamRise now plans one tower of housing at Fourth and Bell St. 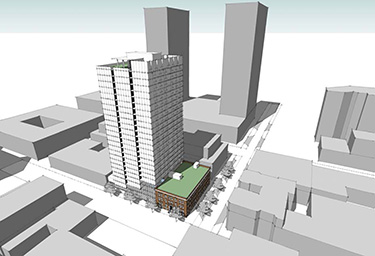 Ten months after the Franklin Apartments in Belltown were landmarked, the Pasadena-based developer TeamRise is preparing to show preliminary plans for the tower it wants to build next door at 2302 Fourth Ave.

TeamRise's architects are CallisonRTKL and Studio 19.

The developer has scaled back its proposal for the approximately 19,000-square-foot site. In 2014, TeamRise was considering two condo towers that would have started construction this year. One of the towers would have preserved the Franklin building's facade.

Now, a single 24-story tower is proposed next to the three-story Franklin, which was built in 1918 and is currently vacant.

Some massing studies and early renderings show the new tower appearing to cantilever over the Franklin. But in what TeamRise calls its preferred option the tower would rise directly upward from a roughly 13,000 square-foot base. It would have a stair-step roofline echoing vertical design elements, and a similar stair-step glass facade at street level.

In the preferred option, Fourth & Bell Tower would have 287 residential units, 8,768 square feet of ground-floor retail space, and 204 parking spaces below grade.

In addition to roof decks on the new tower, the Franklin's roof might also be used as a “large outdoor amenity area.” Whether the new housing — or the Franklin — would be condos or apartments is also unspecified.

TeamRise is part of a large Chinese development company. It paid about $20 million in 2014 for the Franklin and two adjacent parcels to the north. This was the company's first purchase in the U.S.