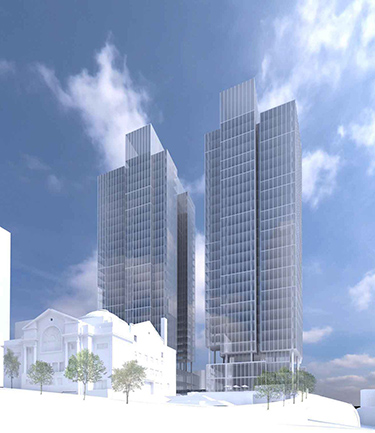 Image courtesy Perkins + Will [enlarge]
A pocket park, open to the public, would occupy the northwest corner of the block. 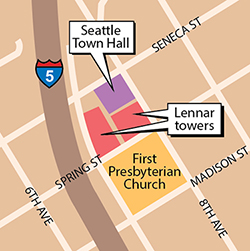 Lennar Multifamily Communities and architect Perkins + Will make their first design presentation on Oct. 19 about two 32-story residential towers planned for an L-shaped site at 1101 Eighth Ave. on First Hill.

The 37,000-square-foot property today is used for parking and is next to Town Hall, which will not be affected by the development.

The site is on the east side of Interstate 5, and is bounded by Seneca and Spring streets, Eighth Avenue and Hubbell Place.

The towers would have a combined total of about 550 housing units, a small cafe and underground parking for about 414 vehicles.

The two towers, dubbed East and West, would be aligned along Spring in Lennar's preferred plan.

A landscaped pocket park, open to the public, would occupy the northwest corner of the block — in exchange for the city granting an alley vacation and a height bonus to about 330 feet.

For the preferred alternative, the developer is also asking the city to decrease setback requirements from the property line to allow more separation between the towers and more public space.

Parties associated with British Columbia Investment have previously asked the city for zoning guidance about developing a separate project on the block just south of Spring, now occupied by First Presbyterian Church and related structures. An advisor to the church previously told the DJC that British Columbia Investment has development agreements in place with the church, but nothing has been executed.