U Village wants to add more retail, another garage on its 24-acre site

By JON SILVER
Journal Staff Reporter
Images by Shugart Wasse Wickwire [enlarge]
West Garage is a seven-story parking structure for 915 vehicles, with 35,000 square feet of retail, restaurant and office space.
[enlarge]
Most of the new space would be located where there is now surface parking.

University Village has filed plans with the city of Seattle for another major expansion that would squeeze more shops, restaurants and parking into the 24-acre shopping center.

The proposal would add 100,000 square feet of commercial space and 915 parking spaces on four sites in the northwest part of the shopping center.

Most of the new space would be located where there is now surface parking, though one retail building would be partially demolished to make way for new construction.

The projects would displace 343 existing parking spaces, so the net new parking would be 572 spaces.

Shugart Wasse Wickwire of Seattle is the architect. Hewitt is the landscape architect.

Susie Plummer, vice president and general manager at University Village, said no tenants have been lined up for the new space.

The architects show several alternatives for each of the four building sites in a design packet filed with the city. Here are the preferred options:

• Site 1 (West Garage): Seven-story parking structure for 915 vehicles with 35,000 square feet of retail, restaurant and office space. The site is at the northwest corner of the shopping center, with garage access on 25th Avenue Northwest. Two existing retail spaces housing Anthropologie and Williams-Sonoma would be demolished, and 175 parking spaces would be displaced.

• Site 2 (West Plaza Building): A single-story, 5,000-square-foot retail or restaurant building located in a plaza next to the West Garage. 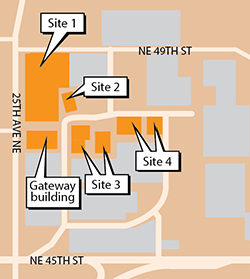 • Site 4 (Village Center): A pair of two-story commercial buildings in a parking area north of the Room & Board store and former Barnes & Noble space. The buildings would total 40,000 square feet, and one would have a third-floor penthouse. Seventy-eight parking spaces would be displaced.

A city design review board is tentatively scheduled to get its first public look at the proposal at 6:30 p.m. Dec. 19 at the Good Shepherd Center at 4649 Sunnyside Ave. N.

University Village, which houses around 120 shops, restaurants and businesses, has opened two parking garages since 2003 as the center has grown denser.

Another new retail building — the three-story Gateway Building — will open soon. The 45,400-square-foot building will house RH Gallery, a Restoration Hardware store, which is slated to open on Nov. 18.

The Gateway Building is north of the Pottery Barn Kids store, off 25th Avenue Northeast. Nelsen Partners is the architect and Lease Crutcher Lewis is the general contractor.

Plummer said University Village has no schedule for completing the new buildings, and no additional plans for expansion when these projects are done.