On the Block: Northgate: Why aren't more developers getting on board?

The Roosevelt neighborhood is swarming with transit-oriented development (TOD), anticipating the 2021 opening of the light-rail station, but Northgate seems comparatively sleepy. Why?

Northgate Station will open the same year, allowing a 14-minute rail commute to downtown. Northgate Transit Center, a major bus hub, is already there and don't forget there's a shopping mall to boot.

When I did a recent tally of multifamily units in the pipeline at Roosevelt, the number was north of 2,000. At Northgate, it's more like 350 units, which are being delivered in two separate projects by two familiar names. 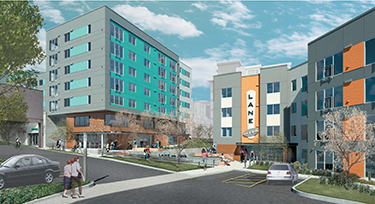 Image by Grouparchitect [enlarge]
The Lane will be Goodman’s first foray into Northgate.

Wallace Properties is starting to seek permits for an unnamed project at 10711 Eighth Ave. N.E. that would have 135 apartments and four live-work units on a roughly 31,000-square-foot lot, now vacant. Baylis Architects designed the seven-story building, with parking for 124 vehicles on two levels above grade. Wallace acquired the site in 2013 for $1.3 million.

Immediately to the north — separated by an easement alley that passes through the block — Goodman Real Estate is planning The Lane, with two buildings and a total of 217 units. Grouparchitect designed The Lane. The complex will have a seven-story, 134-unit, mixed-use building at 10720 Fifth Ave. N.E. and a four-story, 83-unit building at 10715 Eighth Ave. N.E.

Wallace has been the bigger player at Northgate, with Enclave. Baylis designed the apartment complex, which has 428 total units at 507 and 525 N.E. Northgate Way. It was developed in phases that were completed in 2008 and 2014.

Kevin Wallace says he likes Northgate as a developer. “There's a lot of untapped potential. I think a lot of good things have happened over the past decade.”

As catalysts during the administration of Mayor Greg Nickels, he cites the area's last major rezone, and the city's investment in infrastructure. Wallace says his first Enclave building and Lorig Associates' 475-unit Thornton Place kicked off new development there. The recession subsequently slowed development activity, but now “there's a lot of stuff going on. People are making plays [for land].” 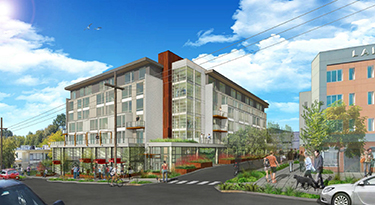 Image by Baylis Architects [enlarge]
Wallace Properties is starting to seek permits for this project at 10711 Eighth Ave. N.E. that would have 135 apartments and four live-work units.

If Roosevelt seems more active right now Wallace says that's because there are more small parcels available to assemble there. Up north, “I don't think there's as many opportunities; not as many places to go.”

In the meantime, he and other developers are waiting to see how and when the city's affordable housing “grand bargain” will change zoning maps and incentives. Greater density should follow light rail, he argues, in an area where current zoning “is way behind the times.”

A case in point is the Park at Northgate, a 146-unit apartment complex at 10735 Roosevelt Way N.E. that Wallace and partners purchased in August for $33 million. It has six three-story buildings that were constructed in 1967, and Wallace says, “There's a shelf life to them.” The five-acre site could be redeveloped, “but that's gonna have to be a conversation with the city. We think it merits additional density.”

The company hopes to break ground in late 2017 and complete the project in early 2019.

The Lane is ahead of that schedule. Goodman Real Estate got the land-use permit last month for what will be its first foray into Northgate.

Goodman's Tim Dickerson says the goal is to break ground in December and finish in 14-16 months, by mid-2018. Goodman purchased part of the 86,000-square-foot site in 2014 for $2.5 million. Dickerson says the rest of the site is owned in a joint venture with other partners, including members of the Pedersen family that ran Olympic Sports. Two old low-rise retail structures will be demolished to make way for The Lane.

Why is Goodman going to Northgate? “We just liked the fact that it is so transit-oriented,” says Dickerson, also citing proximity to hospitals and retail. “The rent rates in downtown Seattle are pushing people to a place like this. The fundamentals are strong.”

After the recession and unlucky market timing of Thornton Place, he says, “I think the area is getting a fresh look.” He concurs with Kevin Wallace that Northgate has less buildable area than Roosevelt does. He also thinks that all developers are waiting to see a new Northgate zoning map after the city presumably implements HALA incentives next year.

When you look at the future of TOD near Northgate, however, two eight-acre parcels stand out. South of the mall is King County's transit center (aka the Park & Ride), presently zoned up to 125 feet. Once light rail starts running and surface parking fills up — or sooner — proposals will surely be floated to build housing on top of parking garages — as at Thornton Place.

North of the mall is Northgate Apartments, built in 1951, with 207 units in 34 two-story buildings. The family-run Mullally Development Co. has owned the property since 1988. In 2012, Mullally negotiated with the city for a rezone to 85 feet in exchange for an affordable housing set-aside.

But since then John Mullally says the family business, which was established in the 1940s, has been busy with estate issues.

“Everybody is doing stuff, and we're not. We don't really have any plans. We're just waiting, and right now that seems the smart move.” Like Wallace and Goodman, he's got his eye on the coming light rail.

“We're constantly getting calls to sell or do partnership deals,” says Mullally, “(but) we're not the kind of people to do joint ventures. We've always got suitors. A lot of the big players have telegraphed us.”