Security Properties starts another 279 apartments in the Spring District 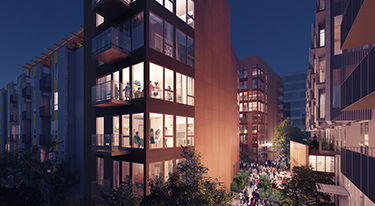 With its Sparc apartments well underway in Bellevue's new Spring District, Security Properties broke ground this week on a second mixed-use complex there.

(Editor's note: The developer was misidentified in an earlier version.)

This one has no name yet, but it will have a total of 279 units in a nine-story building and two six-story buildings. About 3,700 square feet of commercial space are planned with two levels of underground parking for 255 cars. The size is about 367,000 square feet.

In a statement, Security Properties' John Marasco said, “With new residential, retail and office projects on the way, including anchors Global Innovation Exchange and REI, together with the rapidly advancing Sound Transit East Link, we're seeing the long-awaited Spring District take shape, and we couldn't be happier to be a part of it.”

Mithun designed the project, which is scheduled for completion in late 2018.

The 1.8-acre site is just east of Sparc. Both projects are at the south end of the Spring District, along Northeast 12th Street, between 120th and 124th avenues Northeast.

The five buildings in Sparc range from three to nine stories, and will contain 309 residential units and 14,000 square feet of commercial space. GGLO is the architect for the 2.5-acre project. Sparc's first two buildings are set to open next February with 79 units.

The 36-acre, $2.3 billion Spring District is being developed by Wright Runstad and Shorenstein Properties. The new neighborhood will be centered on a light-rail station scheduled to open in 2023.

AMLI Residential also is planning 220 units on 1.5 acres, with a possible start date next year. REI is expected to occupy eight acres there when it moves its headquarters from Kent in 2020.