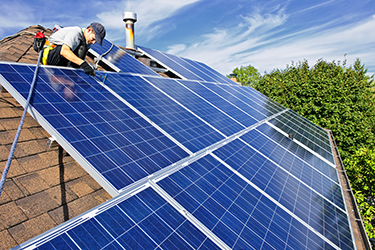 iStock photo [enlarge]
EnergySage, an online marketplace for purchasing and installing solar panels, says the average cost of a solar panel system is $12,500. The payoff time and the amount you’ll save will vary depending on where you live. Over a 20-year period in Seattle you could save $39,452.

Energy-efficient upgrades can not only shrink your utility bill; they can increase the value of your home.

Homebuyers are becoming increasingly aware of the benefits of energy-efficient homes. In fact, they're often willing to pay more for homes with “green” upgrades, says Sandra Adomatis, a specialist in green valuation with Adomatis Appraisal Service in Punta Gorda, Florida.

Just how much your home will increase in value depends on a number of factors, Adomatis says, like where you live, which upgrades you've made and how your home is marketed at sale time. The length of time to recoup the costs of green upgrades also depends on the energy costs in your area.

Consumer Reports suggests that upgrades like a gleaming new kitchen or a finished basement may give you more bang for your buck than energy-saving features. But if going green appeals more than adding quartz countertops, here's where you can begin.

HOW MUCH ENERGY DO YOU USE?

Getting a quick energy assessment or a more thorough energy audit can determine how much energy your home uses, as well as which upgrades would make the most sense for your home and your finances. An audit may include an energy rating, a number that indicates how energy-efficient your home is and how much it will increase if you make recommended upgrades.

The Department of Energy website lists ways to find assessors in your area. The Environmental Protection Agency's Energy Star program offers assessor and advisory services to help you determine what to upgrade. Your utility provider may also offer energy audits.

The cost varies depending on location and who's providing the service. Your utility company may offer an assessment for free or at a discount. A full audit may run $300 to $500 depending on the complexity, according to Don Knapp, senior marketing manager with Build It Green. You may not want to foot the bill for a full audit unless you're planning to take advantage of it with major upgrades.

Once you know where you can improve your energy use, begin by making the changes that are most affordable and have a quicker payoff, Adomatis advises. Then consider whether the costlier ones are worth the investment. Keep in mind that a variety of tax credits and financing options are available for energy-efficient improvements.

Here are some common energy upgrades, from least expensive to most.

1. INSULATION. A 2016 Cost vs. Value report from Remodeling magazine found that the average attic air-seal and fiberglass insulation job costs $1,268, with an added value to the home at resale within a year of completion of $1,482. That amounts to a 116 percent return on investment. And according to Energy Star, homeowners can save $200 a year in heating and cooling costs by making air sealing and insulation improvements .

2. APPLIANCES. Your appliances account for about 15 percent of your home's energy consumption, the DOE says. Certified clothes dryers can save you $245 over the life of the machine, according to Energy Star. A certified dryer from General Electric can run from $649 to $1,399.

When upgrading, look at the kilowatt-hour usage of a new appliance and compare it to your current one — a good Energy Star rating doesn't necessarily mean it will use less energy than your existing appliance, Adomatis says.

3. HEATING AND COOLING SYSTEMS. These systems account for about 43 percent of your energy bill, according to the DOE. Replacement costs for an entire HVAC system — heating, ventilation and air conditioning — vary widely depending on equipment brands and sizing, but may run several thousand dollars. Energy Star estimates that you can save 30 percent on cooling costs by replacing your central air conditioning unit if it's more than 12 years old.

According to Energy Star, a certified heat pump water heater has a payback time of two years and can save a four-person home $3,400 over its lifetime. A 50-gallon Geospring hybrid electric water heater from General Electric costs $1,399, plus installation.

While addressing your home's heating and cooling systems, bear in the mind that leaky duct systems can be the biggest wasters of energy in your home, according to Charley Cormany, executive director of Efficiency First California, a nonprofit trade organization that represents energy-efficient contractors. The cost of a professional duct test typically runs $325 to $350 in California, he says.

4. WINDOWS. Replacing the windows in your home may cost $8,000 to $24,000, and could take decades to pay off, according to Consumer Reports. You can recoup some of that in resale value and energy savings. Remodeling's Cost vs. Value report found that installing 10 vinyl replacement windows, at a cost of $14,725, can add $10,794 in resale value. Energy Star estimates that certified windows, doors and skylights can reduce your energy bill by up to 15 percent. If you've already tightened the shell of your home, installing a set of new windows may not be worth the cost. But the upgrade may be worth considering if you live in a colder climate.

5. SOLAR PANELS. EnergySage, a company offering an online marketplace for purchasing and installing solar panels, says the average cost of a solar panel system is $12,500. The payoff time and the amount you'll save will vary depending on where you live. Estimated savings over a 20-year period in Philadelphia, for example, amount to $17,985, while it's more than twice that amount in Seattle: $39,452, according to EnergySage.

When it comes time to sell, your real estate agent can help you market your home as energy efficient. Provide your agent with utility bills or your energy rating, if you received one with your audit, to include when describing the house on a multiple listing service, or MLS. There's a growing trend in the real estate industry to make energy upgrades visible, Knapp says; energy disclosures are now a common practice in cities like Berkeley, California, and Chicago.

“If it's reflected on the MLS, “it's more likely to be reflected in the resale value,” Knapp said.

Bottom line: If you weigh the costs and savings carefully, going green can be worth the investment.