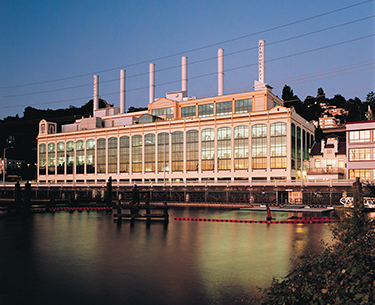 Photo by Karl Bischoff [enlarge]
The power plant was constructed around 1914. ZymoGenetics bought it in 1993 and extensively renovated the space.

In May 2019, Bristol-Myers Squibb Co. will move out of its offices and labs in the Lake Union Steam Plant at 1201 Eastlake Ave. E.

The company announced Tuesday that it will not renew its lease with building owner Alexandria Real Estate Equities.

John Cox, senior vice president and regional market director for Alexandria, said they are disappointed that Bristol-Myers is not only leaving the building, it's also leaving Seattle.

Cox said Alexandria will have more to say in a few months.

“We don't know what we want to do with (the building at this point),” he said. “It's an iconic building and we're confident that we will find someone that will take advantage of its location on Lake Union.”

Bristol-Myers occupies the entire building, which has about 100,000 square feet plus a parking garage. Cox said there are four and a half floors of office/lab space, and a catwalk to the lake that allows tenants to kayak to work.

An industry source who didn't want to be identified said demand for biotech and health care space is hard to quantify because vacancy rates are so low: below 3 percent. He said firms looking for space now will likely end up in another building because the steam plant won't be available for two years.

Lisa McCormick Lavery, a spokesperson for Bristol-Myers, said about 80 workers there will be relocated to other sites, with most going to Massachusetts and New Jersey. A few could transfer to Bristol-Myers' Bothell plant, which makes biologic drugs.

McCormick Lavery said the firm has no plans to change the Bothell plant, where about 65 people work.

ZymoGenetics bought the Lake Union plant in 1993 and extensively renovated the space. ZymoGenetics sold it about 13 years ago to Alexandria. ZymoGenetics was bought by Bristol-Myers in 2010 for $885 million.

Bristol-Myers said it also is closing a site in Hopewell, New Jersey, in phases by mid-2020, and will close its site in Wallingford, Connecticut, by the end of 2018.

The company said the closures are part of a plan to strengthen its research-and-development hubs in central New Jersey, the San Francisco Bay Area and Cambridge, Massachusetts. It plans to build a new R&D facility on its Lawrenceville, New Jersey, campus for lab-based discovery and translational medicine development. It also will construct new facilities in New Brunswick, New Jersey, to support biologics development, and continue to expand its biologics campus in Devens, Massachusetts.

“Today's announcement underscores our commitment to make the right investments to continue to deliver on the promise of our pipeline and to bring transformational medicines to patients, today and in the future,” said Bristol-Myers CEO Giovanni Caforio in a news release.