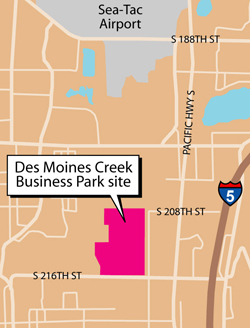 The first three buildings of the Des Moines Creek Business Park, being developed on Port of Seattle-owned land south of Sea-Tac Airport, have sold for $68 million. King County records show the sale, confirmed by developer Panattoni, which includes about 35 acres and half million square feet of industrial space.

“We are selling the project,” said Panattoni's Donnie Belk, but the company keeps the ground lease with the port. Belk said that a CBRE team led by Brett Hartzell brokered the sale, and that the space was fully leased by six tenants. Kidder Mathews assisted in the transaction.

Panattoni has been developing the 87 acres, nine of them environmentally sensitive and unbuildable, in three phases. The project could eventually create about 1.3 million square feet, with a total investment the port estimates at $100 million to $125 million.

The property is located northwest of the intersection of South 216th Street and 24th Avenue South. Beginning in the 1980s, the land was gradually bought and cleared by the port to mitigate noise complaints in a mostly residential area. It became vacant by the 1990s.

Planning for a business park or technology center began in 2005, but development was slowed by the recession. After other schemes and development partners fell through, the port selected Panattoni in 2013. Work began the following year. Panattoni's ground lease also began in 2014, with a 55-year initial term and two 10-year options to extend.

Once projected to take seven years, the project is ahead of schedule. “It's going very fast and very nicely, and we're very pleased,” said Belk.

CollinsWoerman was the architect for phase one, and Sierra was the general contractor. The three buildings measure 157,200, 145,200 and 233,600 square feet. They have 30-foot ceilings, and 119 dock-high and 16 ground-level loading bays. Tenants include K2 Sports, Organically Grown, Greencore, and Meiko.

Phase two, announced last year, is a 300,000-square-foot regional office building for the Federal Aviation Administration. CollinsWoerman is the architect, and Abbott Construction is the general contractor. That project broke ground in June. Expected for completion by early 2018, it will house about 1,600 employees. The FAA will have initial 20-year lease with Panattoni.

With construction to finish in February, said Belk, phase three will have two industrial buildings of 350,000 and 150,000 square feet. Again, CollinsWoerman is the architect, and Sierra is the general contractor. That space is 95 percent leased, said Belk.

The Kidder Mathews team of Christopher J. Corr, Thad Mallory and Travis Stanaway is leasing all the space at the Des Moines Creek Business Park. (The marketing website dmcbp.com.)

Belk said the owners will consider selling phases two and three after they're completed.