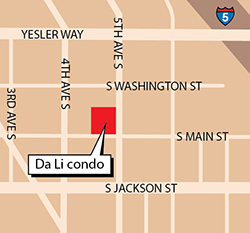 A 14,400-square-foot International District parking lot sold for $5.5 million last summer, and now plans have been disclosed for putting a 15-story condominium and retail building on the site.

As proposed, the project could have about 168 condo units and 84 parking spaces.

Da Li International LLC owns the site and is proposing the project at 450 S. Main St., at the northwest corner of Fifth Avenue South.

Da Li is associated with Kai-An “Kevin” Hsieh, at a Bellevue residential address. Hsieh is listed as a governor of several Da Li entities registered with the state of Washington.

In Taiwan, Hsieh Chih-Chang is the president of Taiwan's publicly traded Da-Li Development Co. Ltd., which develops residential properties, and has other construction-related businesses. The two individuals are connected in some credit reports.

Plans filed with the city call for a 15-story concrete tower with three levels of underground parking. Retail would be on the first and second stories, and parking would be accessed from the alley.

KMD Architects prepared the initial plan for the site, which lies just outside the Pioneer Square Historic Preservation District but inside the International Special Review District.

(Editor's note: The district where the site is located was misidentified in an earlier version of this article.)

If the project is built at the proposed height, which is allowed under current zoning, it could be the tallest building in the immediate neighborhood. Seattle Housing Authority's International Terrace, just up the hill, is 12 stories.