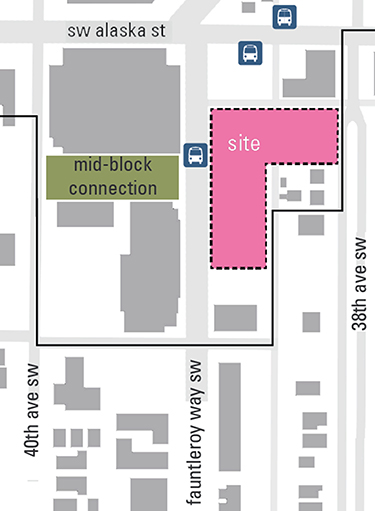 Last summer, CVS Pharmacy and developer Velmeir pulled the plug on a project they had planned for 4722 Fauntleroy Way S.W., notifying the city they would not proceed.

Now the site seems to be back in play.

Legacy Partners has filed early documents with the city that show two apartment buildings separated by the alley. The number of residential units isn't specified.

Nicholson Kovalchick Architects prepared the initial plan for the site, which lies on the east side of Fauntleroy, between Southwest Alaska and Edmunds streets.

The four separate parcels together measure 54,000 square feet, and have long been owned by members of the Campagnaro family. A one-story retail structure would be demolished if Legacy proceeds with the project.

The site is just across the street from where Lennar Multifamily Communities is constructing The Whittaker, which has 389 units and a Whole Foods in two buildings at 4755 Fauntleroy. The south building opened earlier this month, with the north building expected to open in May.

Immediately south of 4722 Fauntleroy, Holland Partner Group is planning 118 units in a seven-story building tentatively called The Foundry, at 4754 Fauntleroy. Earlier this month, a Holland LLC bought those two parcels, which total 18,000 square feet, from two owners for $5.1 million.

All three of these projects — from Lennar, Holland and Legacy — are within the West Seattle Junction Hub Urban Village. Zoning there allows structures up to 85 feet in height.