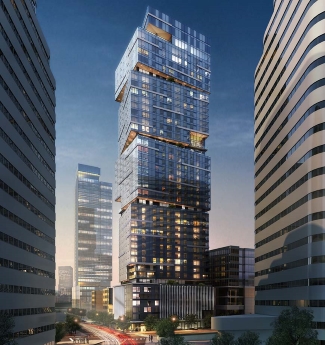 The Burrard Group has cleared two key hurdles with the city for the 41-story Nexus condominium tower at 1200 Howell St. in the Denny Triangle. Earlier this month, the city issued a determination of non-significance for the project, and design approval was granted with minor conditions.

The deadline is Thursday for filing an appeal with the city Hearing Examiner, after which permits could be issued.

At the July design review, Nexus was slated to be 40 stories, and the number of units has also fluctuated since the project was announced in late 2015.

The final design calls for about 3,500 square feet of ground-level retail, a possible restaurant on the upper floors, and parking for 321 vehicles both above and below grade.

The condos are being marketed by Realogics Sotheby's International Realty, which said in August that 80 percent of units had been reserved. Prices will range from the low $300,000s to over $3 million, according to RSIR.

Weber Thompson is the architect. Skanska is the contractor. KPFF is the structural and civil engineer.

Burrard expects to complete the project by mid-2019.