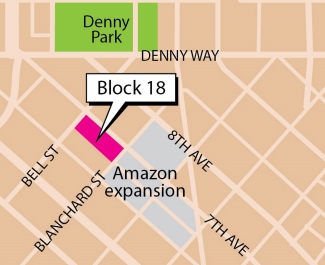 Amazon has added to its Denny Triangle holdings by buying a half block from Clise Properties and related family members. In two separate sales, King County records show the buyer of two adjacent parcels to be Acorn Development LLC, the development arm of Amazon.

Acorn paid $6.44 million for the former Schucks Auto Supply site at 2229 Seventh Ave., now used by the Pronto bike-share program. Located at Seventh and Bell Street, it measures almost 13,000 square feet. The 11 different Clise family sellers, some of them represented by Bank of America as a trustee, acquired the property from Schucks in 2007 for $6.5 million.

Together, the almost 39,000-square-foot site is bounded by Seventh, Blanchard and Bell streets and an alley to the west. In Amazon-related design documents for other projects, the combined property is called Block 18. It is opposite Amazon's planned project at 2200 Seventh Ave., aka Block 21, on the full block Clise sold two years ago for $53 million.

Block 21 will have 850,000 square feet of office space and 26,000 square feet of retail in two buildings of 24 and eight stories, above underground parking for 877 vehicles. Graphite Design Group is the architect. The project is likely to break ground next year.

The DJC previously reported that Amazon had an option with Clise to buy the Block 18 properties. No development plans have yet been filed with the city for the site.

Cornish College, closed for winter break, couldn't confirm the length of its lease for the former motel. The Seattle Times reported in 2009 that Cornish had a 10-year lease with Clise, with an expensive early-termination clause.

(Update: Cornish says it moved its students to a new dorm in August of 2015.)

Pronto couldn't be reached regarding its lease. Calls to Clise weren't returned.