On the Block: Create World revises design for condo tower

Create World will present a revised design on Tuesday for the 39-story condominium tower it wants to build at 1613 Second Ave., newly dubbed The Emerald.

“The name is new,” says Patrick Simonsen of Mirador CWZ LLC, which is associated with Chinese firm Create World. “It'll be a nice new addition to the skyline: a jewel in the city.”

Remember back in the 1980s when tourism officials tried to brand Seattle as The Emerald City? That moniker has and hasn't quite stuck with locals, though it's recognized abroad. Simonsen laughs at the recollection: “A blast from the past,” he calls it, though this glass and steel tower looks emphatically forward.

And west, toward Chinese buyers. 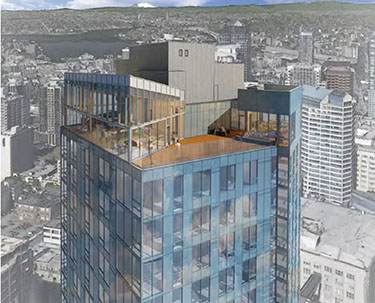 Images by Hewitt [enlarge]
The rooftop level of The Emerald has been altered to create more visual interest at the skyline.

[enlarge]
There will be more transparency on the first three floors — where retail now replaces parking.

The Emerald will definitely be condos, not apartments, says Simonsen. Create World CEO Lili Lu said last year that up to 40 percent of the units could be sold to Chinese nationals. Here and in Bellevue, it's no secret that condos are being marketed to foreign buyers who are eager to move capital abroad.

The Emerald site is at the southwest corner of Second Avenue and Stewart Street. The project last had a design review in September of 2015, and a master use permit was issued last June.

Now Hewitt is showing these revisions since the earlier proposal:

• Parking has been reduced and its all below grade. There had been 145 spaces above and below grade, and now there will be about 63 spaces on five underground levels. There will be only one garage entrance, on the alley to the west, instead of two.

• Unit count has gone from 177 to 266. They will range from one to three bedrooms, with no studios.

• The rooftop level has been altered to create more visual interest at the skyline, and the angles of the curtain-wall facades have been adjusted to better match the street grid.

• At street level, the curtain-wall now descends closer to the sidewalk, with more transparency on the first three floors — where retail now replaces parking. The facade on Second has been notched with a setback to provide visual interest.

• The residential entrance has been moved from Second to Stewart, to create more retail frontage on Second.

As before, the tower would have a roof deck and smaller deck at the third floor, overlooking Stewart.

The project is being designed to LEED silver standard.

“The absolutely stellar difference is the elimination of above-ground parking,” said Hewitt's Sean Ludviksen. “It creates more activity at the street. It was the development team's decision.”

Originally The Emerald was to have one level of retail; now it has two. A third level for residential amenities such as a gym is now more open to the street.

“I think from a pedestrian-level experience, the changes are really positive,” says Hewitt's Julia Nagele, who describes the firm as being “pleasant surprised” by the owner's voluntary reduction of the parking.

Hewitt, whose office is at 101 Stewart, will benefit from the change. “I'm looking at the site 16 feet across the alley,” said Nagele. “It's quite special.”

The Emerald will replace the two-story MJA Building (built in 1914, not a landmark), which houses Caffe D'Arte. Ludviksen says that the cafe has served as one of his firm's conference rooms.

The city considers the new design — with more units and less parking — a major MUP revision, but Ludviksen says “For us, it's a refinement.”

Zoning for The Emerald's site allows mixed-use residential towers between 290 and 400 feet. With a proposed $2.2 million linkage fee for affordable housing, the developer is asking the city for 101,000 square feet of bonus area, yielding 12 extra floors.

With a roof deck and mechanical levels on top, the tower will have an absolute height of 440 feet.

“It's the same size, same height,” says Simonsen. “We think we've improved it by removing the above-ground parking.”

Beginning at the 17th floor, The Emerald will cantilever about 14 feet over the Broadacres Building to the south, at Pine Street. That 10-story building will not be altered or demolished.

Through an LLC, Create World bought the 8,748-square-foot site for $17.1 million last year. The deal also included air rights over the Broadacres Building.

Wood Partners of Atlanta had previously developed the project with Hewitt, before selling.

“We hope to be permitted by the end of April or May,” says Simonsen. “That would allow us to start [construction] in early May to early June.” Construction should take about 30 months.

Brokers for the retail and condos should be announced by spring or summer.

Regarding Caffe D'Arte, he said, “We've actually talked to them about coming back” once construction is completed. The regional roaster recently opened a new shop at 99 Yesler Way, which will mean a bit longer walk to Hewitt's unofficial conference room.

Create World has two other local projects being planned. One is an unnamed 26-story mixed-use tower with 244 units at 427 Ninth Ave. N. in South Lake Union. In Bellevue, at 10230 N.E. 10th St., the developer has started a project with 162 apartments in a six-story building that is now under construction, and a possible 20-story tower with 110 condos.