Fana Group moves ahead with its first two towers in Bellevue 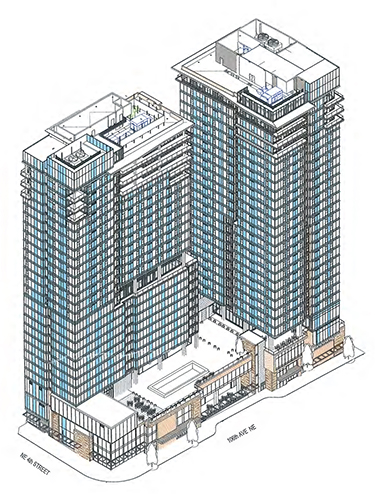 Images by CallisonRTKL [enlarge]
Phase one will have two 27-story towers on a three-story podium. The north tower will have apartments and a hotel, and the south tower will be housing. 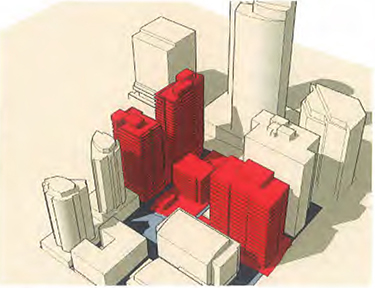 [enlarge]
The mixed-use complex Four 106 could ultimately have about 1.2 million square feet. Fana intends to build in three phases, shown here, over about 10 years. 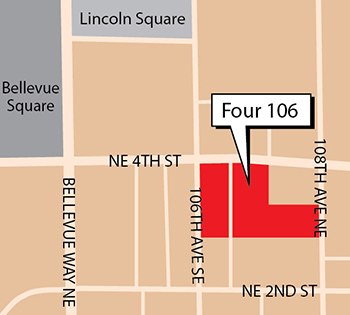 Two years after buying a large Bellevue parcel for $21.5 million, the Fana Group of Companies has received a determination of non-significance from the city for Four 106, a huge mixed-use complex that could ultimately have about 1.2 million square feet.

The site is at Northeast Fourth Street and 106th Avenue Northeast.

CallisonRTKL is designing Four 106. DCI Engineers is the structural engineer and Schwartz Co. is the project manager. Fana couldn't be reached to confirm its choice of a general contractor.

Bellevue-based Fana got a land-use permit in December, and the final step is a building permit that would clear the way for construction to begin on the first phase, which will be at 320 and 350 106th Ave. N.E.

The real estate investment and development company owns 2.87 acres of the superblock. Fana's site is north of Soma Towers and east of the Expedia building.

Fana intends to build in three phases over about 10 years.

The company spent a total of $71 million assembling the site, which also includes a nine-story KeyBank building that was constructed in 1972, and will eventually be demolished to build the third phase.

Phase one will have two 27-story towers on a shared three-story podium. The north tower (on Fourth) will have 101 apartments and 120 hotel rooms to be managed by Kimpton Hotels & Restaurants. The south tower will have about 225 housing units. Four levels of underground parking are planned with about 326 stalls.

Phase two will be at 305 108th Ave. N.E., and is expected to be office space or apartments, depending on market conditions. The height could range from 10 to 27 stories.

Phase three will be at 10655 N.E. Fourth St. It will replace the KeyBank building with a five to 10-story apartment building and retail annex.

Fana's website says it owns and operates over 1.5 million square feet of commercial and hospitality properties. The holdings are in the United States, Canada and the Caribbean.

In Seattle, Fana is also planning a 48-story hotel and apartment tower at 802 Pine St.