Capstone switching from office to apartments for site on Dexter 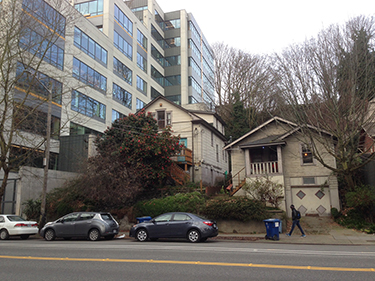 Photo by Brian Miller [enlarge]
Capstone Partners has decided to build apartments on this site next to Facebook’s offices in Dexter Station.

There's a group of four little wood-frame houses along Dexter Avenue in the canyon of new buildings west of Lake Union, but they are about to disappear.

Capstone Partners was planning to tear them down to expand Dexter Station, the office complex at 1101 Dexter Ave. N., which is fully occupied by Facebook. That addition at the corner of Highland Drive was to be called Dexter North, with 150,000 square feet connected to Dexter Station. LMN Architects designed Dexter North, and plans were presented to the city last summer.

Last week, Capstone began to buy the remaining parcels it didn't already own on the 26,895-square-foot site, beginning with a $2 million purchase.

But Capstone's Mike Hubbard said it won't be for office space.

“Facebook didn't want it,” he said. “Our plan is to build housing,” with roughly 170 units and an undetermined amount of parking. Capstone expects to close soon on the rest of the parcels.

King County records already show the sale of two small parcels at 1121 Dexter Ave. N. for $2 million. The seller was architect Peter Stoner, who acquired the property in 1989 for $160,000. He primarily designs houses, and has an office at that address.

“He's gonna continue to operate his architecture firm there until such time as we demo the building,” said Hubbard. The four small houses there also will be razed.

Dexter Station was designed by LMN and opened three years ago, with about 350,000 square feet of office space. Facebook's lease was first reported in early 2015, and the company moved into its new digs — designed by Frank Gehry — last May. It has a 10-year lease and options to extend. 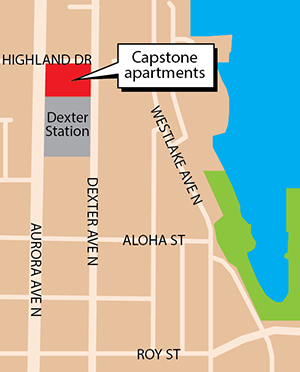 When Facebook moved in, Capstone floated the idea for Dexter North, which most people assumed would be filled by Facebook, too.

What's changed since then, of course, is the announcement last December that Facebook would lease all 384,000 square feet at Vulcan Real Estate's Arbor Blocks in South Lake Union.

Arbor Blocks was designed by Graphite Design Group and is under construction now, with two six-story buildings on opposite sides of Eighth Avenue North, which will become a curbless street called a woonerf (Hewitt is the landscape architect for that). It is expected to open in 2018.

(Editor's note: This story has been changed to correct the architect and the landscape architect.)

Given Capstone's experience in multifamily development, Hubbard is sanguine about the change in plans. Demand for apartments on Dexter remains strong, and zoning allows structures up to 85 feet. And think of the two-minute commute for some of those Facebook workers — estimated to number around 1,000 — next door.

“The proximity of housing next to Facebook makes it easy to execute,” he said. “We're very strong on the site.”

Weber Thompson is designing the unnamed residential project, which will probably have the address of 1115 Dexter.

Hubbard hopes to break ground in about a year, after the entitlement and permitting process.