The Whittaker's retail sold for $24M, but it won't have Whole Foods store 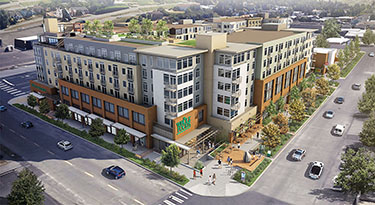 Rendering by Fuller Sears [enlarge]
The Whittaker’s north building will open to residents this summer.

King County records show the retail space in The Whittaker complex has sold for $24 million to an affiliate of Weingarten Realty Investors, but Whole Foods said Friday that it has decided to indefinitely delay its plans for a store in the West Seattle complex.

The seller was an LLC associated with Lennar Multifamily Communities, which is developing the complex. Lennar confirmed the pre-negotiated sale, which involved no brokers.

Weingarten and Lennar are partners on The Whittaker, which is at 4755 Fauntleroy Way S.W. The phased development will have 389 apartments above 70,000 square feet of retail.

The first of two mid-rise buildings opened last September and is now 68 percent leased, according to Lennar.

The north building is expected to open and begin leasing to residents this summer.

Whole Foods was announced as the anchor tenant in the north building, taking 41,000 square feet. But a Whole Foods spokeswoman, Beth Krauss, told the DJC in an email that those plans have changed.

“As part of a careful evaluation of our growth strategy, Whole Foods Market has decided to delay indefinitely the opening of our West Seattle store,” Krauss wrote. “We look forward to continuing to serve Seattle with our three other area locations: Interbay, Roosevelt Square, and South Lake Union.”

Last month Bloomberg and others reported that the Austin-based Whole Foods, a publicly traded company, was shrinking its store count and reducing expansion plans. It currently has about 440 stores in the U.S.

Weingarten is handling the retail leasing for The Whittaker. Tenants signed last fall were CityMD Urgent Care, MOD Pizza, BECU and T-Mobile. Without Whole Foods, the retail is now about 16 percent leased.

The Whittaker is named for legendary local mountaineer Jim Whittaker, the first American to climb Mount Everest. Whittaker grew up in West Seattle.

Chinn Construction is building The Whittaker, which was designed by Fuller Sears, with Weber Thompson the architect of record.