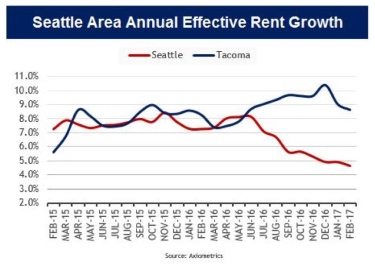 Graphic by Axiometrics [enlarge]
Tacoma and the South Sound are generally outperforming Seattle on rent growth.

Dallas-based research firm Axiometrics forecasts 3.3 percent average rent growth for greater Seattle this year. This is a decline from February's 4.6 percent, and consistent with a year-over-year downward trend. The firm's February 2016 figure was just over 7 percent.

Axiometrics says Tacoma is outperforming Seattle with a projected 5.2 percent average rent growth. However, average rents are much lower for Tacoma, at $1,276, than Seattle's $1,776. (Note that Axiometrics includes Bellevue and Everett in the Seattle figure.) The average rent increase in Seattle-Bellevue-Everett was $26.

Occupancy rates are flat, year over year, at 95.6 percent in Seattle and 96.1 percent in Tacoma.

In a statement, Axiometrics' senior VP of analytics Jay Denton said, “New supply in Tacoma is still at low levels, which should continue to support strong performance in the market, even as job growth is predicted to fall to 1.9 percent this year.

“Seattle is seeing a much higher volume of new deliveries, though continued healthy job growth should keep the market among the top major metros in the nation.”

Domestic migration follows job growth, and that is one reason occupancy rates are flat, despite new supply. And many King County workers actually reside in Pierce and Snohomish counties.

New Census Bureau data for 2016 report that Pierce and Snohomish counties had the largest one-year increases in net domestic migration, which is people in minus people out. That population spurt, from July 2015 to July 2016, ranked them first and second in the U.S. King only ranks 25th on that list.

However, in terms of absolute population growth during the same period, King grew by a much larger 35,700 people, or 1.7 percent. That includes births as well as domestic and international migration. The latter two combined are 24,000 people.

Given such population growth, current and future, the latest biannual Dupre + Scott market report shows apartment supply is basically keeping up with demand. Mike Scott writes, “The region has been handling near record levels of apartment construction quite well, at least so far.”

For the Puget Sound region, including new projects in the initial lease-up period, “the gross vacancy rate is 4.8 percent, unchanged from six months ago. It has been hovering just below 5 percent for four years now.”

The market vacancy rate is down slightly from September, to 3.4 percent. Scott writes, “By the end of this year, the market vacancy would increase to 4.1 percent, and the gross rate would be 5.3 percent. Development activity keeps increasing, but job growth forecasts have also been increasing.”

For the region as a whole, which has some overlap with Axiometrics' sample, Scott says, “rents rose 2.6 percent in the region since September and are 8.5 percent higher than they were a year ago.”

New construction in Seattle, which typically gets a 40 percent rent premium, is distorting the market, says Scott.

“Seattle rents rose 7 percent in the past 12 months. When you adjust for the skew of the new, they rose 5.8 percent. That's less than the increase in the region” compared to a year ago, he says.

In general, Kitsap and the south Puget Sound markets are outperforming Seattle and the Eastside in rent increases. And the new census figures indicate those regions are experiencing more population churn.

To meet that supply, says Scott, “demand in King, Pierce, and Snohomish counties has averaged almost 9,000 units a year over the past three years.”

It's worth remembering that not all tri-county population growth will expand into the rental market. Newcomers also buy houses and condos. Thus, Scott sounds a note of caution about demand: “Will demand match the number of units developers plan to open over the next few years? That's asking a lot. So investors should plan for higher vacancies and fewer rent increases.”

Also, he warns, utilities and real estate taxes — which support Sound Transit 3, among other things — have grown faster than rents over the past 15 years, “once you exclude distortions from the new units added.”

Scott continues, “There is a very significant and unsustainable disconnect between these cost increases and apartment rents. That's particularly true since these are the two largest operating expenses investors have.”

At the same time, Scott cautions, rents are cyclical, and annualized rent concessions have risen about 20 percent over the past two years.