PHG announces $3.5M land purchase and up to 95 affordable units 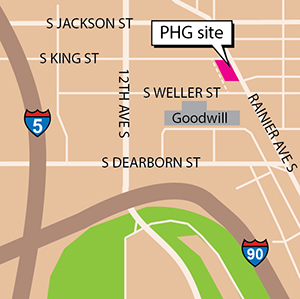 Ending months of speculation about 501 Rainier Ave. S., at the corner of South King Street, the new owner of the Linc's Tackle Shop site has shown its hand. Plymouth Housing Group announced its purchase of the 15,000-square-foot property. King County recorded the $3.5 million sale last week. The transaction was worth about $233 per square foot.

Longtime owner of Linc's, the Beppu family established that business before World War II. After the family was interned during the war, the Beppus reopened Linc's on Rainier in 1950.

PHG will build new permanent supportive housing on the site.

In a statement, PHG deputy director Betsy Hunter said, “We are excited to be working with the community to make this project an asset to everyone in this vibrant neighborhood.”

PHG's communications manager Amanda Vail said “very preliminary plans” would have between 85 and 95 units in what is likely to be a six-story building. (Zoning allows structures to 65 feet, though HALA bonus incentives might apply.)

Weinstein A + U will be the architect, and Walsh Construction will be the general contractor.

Parking may not be required or provided for the project, since the site is well served by bus transit along Rainier. Linc's is also a block south of the streetcar line that connects Capitol Hill to Pioneer Square. PHG's ground-up projects, including the 80 units now under construction at Seventh Avenue and Cherry Street, generally do not have parking.

The Linc's shop and other small structures will be removed to make way for PHG's development.

The Seattle Times' Danny Westneat has written extensively on the Beppu family and Linc's. The Times previously reported that Linc’s would close at the end of March. PHG now clarifies that Linc’s will remain open and sell off its stock through May 31.