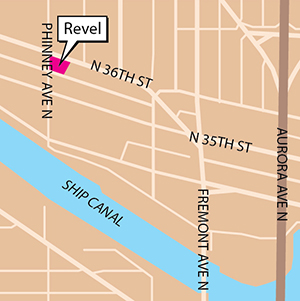 The restaurant Revel and companion bar Quoin, run by chefs Rachel Yang and Seif Chirichi, have been widely acclaimed since opening in Fremont almost seven years ago. Now that site at 401 N. 36th St. is headed for redevelopment.

Evolution Projects, a partner in the restaurant, owns the land and remodeled the building for Revel in 2010, using Graham Baba Architects. The restaurant and bar now measure about 3,200 square feet, with surface parking to the south.

“We're looking at plans for redeveloping the site,” confirmed Ira Gerlich of Evolution Projects. “The plans are for the restaurant to stay. It'll likely shut down and reopen” following the redevelopment. “We'd love them to stay.”

Early plans filed with the city indicate that Evolution Projects and architect Weber Thompson will clear the 11,000-square-foot property at the corner of Phinney Avenue North. Replacing the small old one-story building will be a three-story structure above two levels of underground parking for 43 vehicles.

The top two floors would have 19,600 square feet of office space. Gerlich said, “We haven't secured any tenants yet.” He hopes that the project might have permits in about 10 months “in a best-case scenario.”

After that, “We don't have a timeline” to break ground, said Gerlich. Partners and tenants are still being sought. Construction would take about 18 months.

The 6,000 square feet of ground-floor commercial space would potentially give Revel twice as much room, if Yang and Chirichi decided to return to that location after construction. Efforts to reach them were unsuccessful. Gerlich said they were fully aware of the planned redevelopment.

(Update: In a statement, Yang said, “Revel considers Fremont to be its home, and is excited about the new building. It's always been about the community with Revel, and this new building will be an amazing gathering space.”)

Married partners Yang and Chirichi also run Joule, Trove and Revelry (the latter in Portland) through their Relay Restaurant Group. Joule has moved once since its founding in 2007, and Revel could do the same.

Through an LLC, Evolution Projects bought the Revel site in 2008 for almost $1.9 million. The company's other recent notable projects include the Fremont Collective, Belltown Collective and the Kolstrand Building.