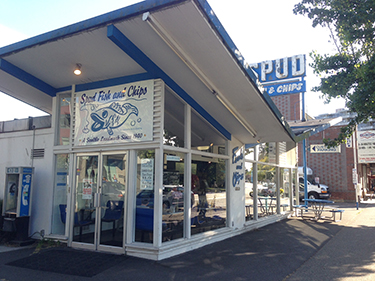 Photo by Brian Miller [enlarge]
The 1,600-square-foot Green Lake restaurant, with its butterfly roof, was built in 1959.

The site of the Spud Fish & Chips restaurant at 6860 E. Green Lake Way N. sold last month for $3.1 million, according to King County records. Redevelopment plans have now been filed for a 59-unit apartment building with ground-floor retail space.

The buyer was Blueprint 6860 LLC, an entity of Blueprint Capital, a small Seattle REIT that develops property and finances projects for other developers.

The sellers were a married couple who acquired the property and the Spud business in 2001 for $633,000. Brian Harwood of Windermere Real Estate represented the sellers.

The property is at the corner of Fourth Avenue Northeast, and faces Green Lake Park. It measures 9,123 square feet.

Spud was founded on Alki in 1935 by brothers Jack and Frank Alger. Spud at Green Lake was part of the chain until 2001, when the Alger family sold its restaurants and land. Ivar's owns the Alki location, and another investor owns the locations at the Edmonds ferry terminal and Juanita Beach.

The 1,600-square-foot Green Lake restaurant, with its butterfly roof, was constructed in 1959. The midcentury modernist design, by Edward Cushman, falls into what is often called the “googie” style. 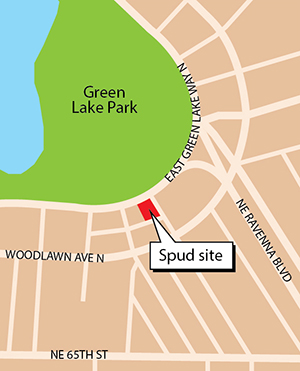 Cone Architecture is designing the new structure. The preferred design is a four-story building with 54 small efficiency dwelling units (or SEDUs), which are typically under 300 square feet. There would also be five larger live/work units and about 1,600 square feet of restaurant space on the corner. Total project size would be 30,416 square feet.

No parking is required for the building. Tenants would have a large bike room for about 41 bikes, and a fitness room. A roof deck measuring about 3,000 square feet would face the lake.

Three possible surface parking stalls could be used by tenants or a business, and would be accessed from the alley to the south. Cone says that parking may or may not be part of the final design.