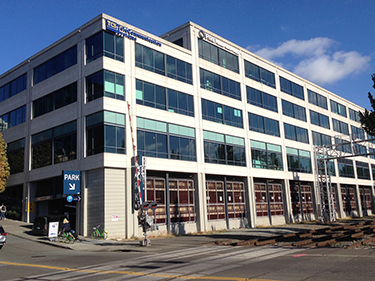 Photo by Brian Miller [enlarge]
A LLC associated with Unico Properties bought the property, which has about 133,177 square feet of office space.

The World Trade Center North building, at 2401 Elliott Ave., has sold for $65 million, according to King County records.

The seller was T-C World Trade Center North LLC, an entity of TIAA (formerly called TIAA-CREFF), which acquired the property in 2007 for $71 million. It was then fully leased.

The buyer was UCP 2401 Elliott LLC, which is associated with Unico Properties.

The five-story building has about 133,177 square feet of office space. The Port of Seattle owns the almost 40,000-square-foot site and the garage, which has 360 parking stalls.

WTC North is at the southwest corner of Elliott and Wall Street, close to the waterfront and Alaskan Way. The garage is linked at the south end to the port's Bell Street Pier parking garage. Unico also owns the building above that garage, at 2323 Elliott Ave., which it acquired from The Art Institute of Seattle in 2012 for almost $15.9 million. The Art Institute remains a tenant in the building.

Current tenants at WTC North include PMI, Comtech TeleCommunication Systems and Stanley Thermos. The trade publication Real Estate Alert reported in May that TIAA would sell a portfolio of seven properties valued at $500 million, including WTC North, which was then said to be 99 percent leased. OfficeSpace.com now says the building is about 75 percent leased.

For many years, the building was identified with RealNetworks, which leased the whole building and other space along Elliott, though it sublet much of the WTC North space following the 2001 dot-com crash.

About three years ago, RealNetworks consolidated into a smaller space at Home Plate Center in SoDo.

Brokers were not announced for Unico, which could not be reached before deadline to comment.