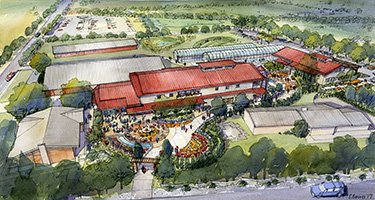 Image by Stephanie Bower [enlarge]
The center will house job-training services for low-income women, as well as an event space and a farm-to-table restaurant.

The Puyallup-based nonprofit Step By Step said it will start applying for permits soon to develop a six-acre site at the former Van Lierop Bulb Farm in Puyallup.

Jeff Brown Architecture is the architect and Mountain Construction is the general contractor.

Step By Step wants to turn the site at 13407 80th St. E. into a multi-service center that will offer education and job-training services for its clients. The group is also planning a 420-person event space, a training kitchen, greenhouse, farm-to-table restaurant and catering services.

Krista Linden, the founder and executive director of Step By Step, started planning the center over six years ago, when the organization identified a need to better support its clients in finding work.

Step By Step said in a press release that the center will house businesses that could create about 100 jobs, which could eventually be filled by its clients, who are low-income women with children.

Step By Step purchased six acres of the Van Lierop Farm property in 2016 after raising $1.5 million. So far the group has raised a total of $4.3 million for the center, and the goal is to raise at least another $1 million over the next few months to remain on schedule for its planned grand opening in 2018.

The center will be named after local Puyallup Valley resident Germaine Korum, who is known for her advocacy for women and children. The Korum family earlier gave $500,000 to help the organization acquire the property.