TOD proposals due for Northgate Station; city is seeking an upzone

By BRIAN MILLER
Journal staff reporter
Image by to VIA Architecture [enlarge]
A 240-foot zoning study included in the RFP shows the project size could reach 1.8 million square feet. About 1.5 million square feet is possible under current zoning.

King County is asking developers to submit proposals for mixed-use projects at its Northgate Transit Center, and the city of Seattle wants to upzone the property from 125 to 240 feet.

The city and county issued a joint statement on Friday, and provided more details about a $20 million low-interest capital loan agreement that was announced late last year to help create affordable housing on the site.

The county's request for proposals was published Friday in the DJC, and responses are due by Dec. 21. The county wants to select a developer, or developers, by late spring of next year.

Northgate was last upzoned in 2009. Seattle City Council would have to approve the upzone. The draft environmental impact statement was published in June, and the final EIS is expected this month.

Next year, the city is also expected to release a right-of-way improvement plan for Northgate, along with bicycle and pedestrian measures. Developers would have to incorporate those plans into their projects.

The county-owned site is just south of Northgate Mall, and bounded by First and Third avenues Northeast, and Northeast 103rd and 100th streets. Part of the roughly eight-acre site is now being used for construction staging for the light rail station, which is scheduled to open in 2021.

Last December, the city and county agreed to contribute $10 million each for at least 200 affordable units in the first phase of the transit-oriented development project. Other incentives would apply, likely including both the city's Multifamily Tax Exemption Program (MFTE) and the Housing Affordability and Livability Agenda (HALA). 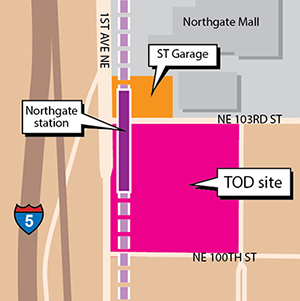 Thus, the 200-unit figure is only a baseline, and more affordable units are likely. The overall number of units, including market-rate, could be two, three or four times more. That will be up to the developer, and the mix of residential, office, retail and/or hotel uses.

The RFP states, “The county expects that a successful development will include market-rate residential and commercial uses, affordable housing, community spaces, and publicly accessible open space. The county and the city seek to accomplish four primary objectives: affordable housing; a connected, accessible and well-designed project; improved transportation options for ETOD [equitable transit oriented development] residents and the community; and a model of environmental sustainability.”

Sound Transit estimates that Northgate Station will serve 15,000 riders daily, and that the travel time to downtown will be 14 minutes.

The plan has two phases:

Construction would begin in late 2018, after Sound Transit's 450-stall underground parking garage is completed. That garage is under construction on the county-owned southwest corner of the mall block (north across 103rd). Simon Properties owns the rest of that super-block.

The goal is for phase one to be completed when Northgate Station opens in 2021. In effect, the city and county want the affordable housing to be done first; everything else is icing on that cake.

• Phase two would begin after 2021. That approximately 2.5-acre parcel, closer to the freeway and Northgate Station, is only available to lease. But there are no restrictions on the type of development, as with phase one. The county says the entire site is well located for residential, office, retail, hospitality and other uses.

The county prefers that proposals address development of both phases. Two different developers could conceivably end up with two projects, though that is unlikely since they would need to be tightly coordinated.

A separate project also will impact the site: a new $37.5 million bike-pedestrian bridge over Interstate 5 linking Northgate Station with North Seattle College and the Licton Springs neighborhood to the west. Completion of the bridge is expected in mid-2020. VIA Architecture is the lead designer; a general contractor will be chosen next year.

Northgate Station itself has a $174 million budget, as part of the overall $1.9 billion Northgate Link Extension project. Absher Construction Co. is the general contractor for the station, and Hewitt is the architect.

The underground garage is part of the station project.