41-story Denny tower to top out in January 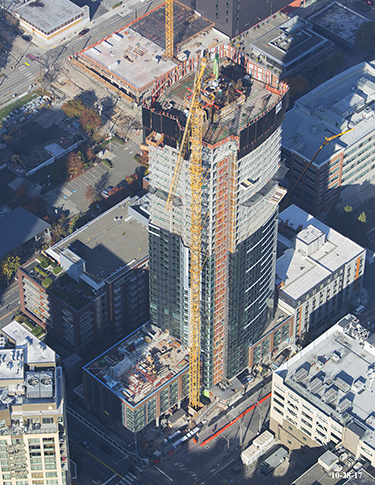 Holland Partner Group in January will top out its 41-story apartment tower at 970 Denny Way in South Lake Union.

When finished next summer, the 435-foot-tall tower will have six levels of underground parking for 357 cars, 461 residential units, 15,600 square feet of retail space and two decks: one atop the six-story podium and the other on the roof. Nearly 200 bicycle parking spaces will be provided.

Apartments will range from studios to three-bedroom units, between 500 and 2,800 square feet. Most will be one-bedroom, in a number of configurations.

The podium will be finished in brick with steel canopies to reflect the neighborhood's industrial past. The roof deck will have an indoor sky lounge and landscaping.

The tower is made of cast-in-place concrete with post-tensioned slabs. The core uses 386 steel fiber-reinforced concrete coupling beams that eliminate the need for diagonal bars that would cause congestion in the rebar cage.