On the Block: Office building planned for skinny Fremont site

“It's crazy,” says serial entrepreneur Kevin Conroy about the growth Fremont has seen along the old railway line that cuts through that once-industrial neighborhood. (Today, of course, it's the Burke-Gilman Trail.) He should know, having operated his old software firm, Blue Rooster, for about a decade in the building that still bears its name.

The Blue Rooster Building is at 1300 N. Northlake Way, on the corner of Stone Way North. Conroy leased, renovated and later bought that two-story building in 2014. It has about 16,000 square feet, which are leased to Tableau — a huge presence in Fremont — and Micasense, which makes cameras for drones. 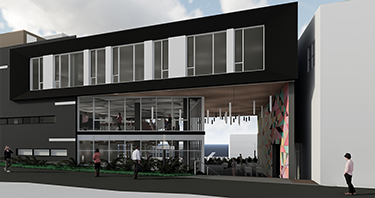 Image by Weber Thompson [enlarge]
The Fremont NorthShore office building will have a ground-floor cafe facing a new pedestrian mews.

Conroy sold his old business in 2015 to Perficient of St. Louis. Until then, the building also housed a tasting room for his 509 Wine Co., since closed.

However, Conroy has been keeping busy. He and partner Jim Neuburger are now planning a new companion building immediately to the east at 1326 Northlake, on the same narrow industrial strip between Northlake and the BGT, just south of North 34th Street.

The three-story Fremont NorthShore Building will occupy a 20,825-square-foot site. Through an LLC, Conroy and Neuburger acquired the property in 2015 for a little over $1.65 million. In a 90-year-old building to be demolished, current tenant Joseph J. Jefferson & Son, a stucco and siding contractor, is in the process of moving to Interbay. 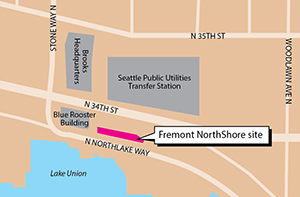 “It took a long time to assemble,” says Conroy, since the old railroad line had awkwardly sliced into four different parcels along Northlake. Above the Jefferson building, a former railroad maintenance barn, “it was all blackberry bushes.” There was also a land swap with Talon Private Capital, which owned the next parcel to the east, plus a boundary line adjustment with the Blue Rooster Building.

The plan, by Weber Thompson, will have about 30,000 square feet of offices on the upper two floors, with a large roof deck above. The ground floor will have about 30 structured parking spaces, accessed from Northlake, plus a bike room for 66 bicycles.

A 2,440-square-foot restaurant or cafe space will occupy the west end of the building, facing a new pedestrian mews.

Says Conroy, “We really wanted something that connected to the water. And Weber Thompson came up with the mews. It makes for an amazing opportunity. Having had the winery in there [before], we knew that could be fun.”

That double-height pedestrian passage will make the two buildings less of a barrier, inviting public access from 34th and BGT. Also, to create less of a dark canyon effect, says Conroy, “We're gonna light the trail there” and reduce the trailside shrubbery — something all runners, walkers and cyclists will appreciate. “I ride to work every day. How can we work to make that better?”

And then to further enliven the street life, and complement Brooks Sports' headquarters across the street at Stone34, “We see some sort of beautiful mural” inside the mews.

To put it mildly, Conroy is bullish on the Wallingford-Fremont area, which has seen a recent surge in office development activity — most notably including Tableau's new headquarters at NorthEdge, a stone's throw away.

And Fremont, says Conroy, is more a state of mind than a fixed region. To him, “It's really coming more east into Wallingford”— hopping the old divide of Stone Way.

As for Fremont NorthShore, he says, “It's a spec office building for now. I imagine it won't be on the market for long. We have the building set up to be single-tenant or multi-tenant.” The JLL team of Cleita Harvey, Kim Allison and Kathryn Pope is marketing the space.

One of the big selling points is the location overlooking the waterfront. “All three floors have great views,” says Conroy. “It's gonna have a really amazing roof deck, probably 4,000 to 6,000 square feet. Maybe even a proper bar,” where people can watch the seaplanes and sailboats on Lake Union.

Total project size is about 45,000 square feet. Conroy hopes to have a master use permit in March. “Hopefully, we start construction in March as well, and complete it in 12 months.”

And this won't be Conroy and Neuburger's last building in Fremont, he says. “There's some other projects that we'd like to do in that area. We have a third property in development. I have a good relationship with Suzie Burke” — the president of Fremont Dock Co., which owns so much land in the area. Some of it has recently been ground-leased, as is the case with the planned seven-story Watershed office building, at 900 34th, and Tableau's newly opened Data 1 Building at 744 34th.