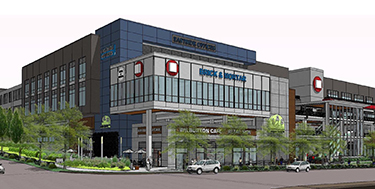 Back in 2009, KG sold several old auto dealership properties it had assembled to a REIT associated with Principal Financial Group of Des Moines, Iowa. The price was $36 million for just over eight acres along 116th Avenue Northeast.

On Principal’s behalf, KG has already developed one new retail complex — Bellevue North — with tenants Home Goods, Trader Joe’s and REI on the north side of Northeast Fourth Street, at 402 116th. The 82,000-square-foot complex opened in the fall of 2016.

Next up, on the south side of Fourth, is 316 116th, previously home to a Volvo and Chrysler lot. KG is now planning to develop the five acres with a four-story mixed-use building totaling 426,769 square feet. Medical offices, retail and a grocery store are indicated. The building will have three levels of structured parking for 695 vehicles.

The city of Bellevue just approved the project with minor conditions; and it was granted a determination of non-significance. Appeals are due by Thursday.

KG’s plans refer to the new project as both Bellevue South and Wilburton Village, which could merely be placeholder names.

The only future tenant mentioned in city of Bellevue records is Dave & Buster’s, a family-style sports bar and restaurant chain than features indoor games and entertainment.

Running directly east of the property are the decommissioned freight tracks that will become the Eastside Rail Corridor Trail. The KG project is designed to connect with the trail.

KG’s original plans for redeveloping the entire eight acres were delayed by the city’s decision about five years ago to extend Fourth east from 116th over the railroad tracks to connect with 120th Avenue Northeast, by Home Depot and Best Buy. The city reportedly paid Principal $6.2 million for the land condemnation, plus a larger payment to the separate Best Buy property owner.

KG also owns another five acres on Auto Row, just north up the street at 430 116th. It paid $24 million for that property, now occupied by Chevrolet of Bellevue, in late 2016. If and when that property is redeveloped, Bellevue North may become Bellevue Central.

In Seattle, KG previously developed the first phase of Ballard Blocks, then sold the north and south blocks to a Principal-related LLC. Phase two, the south block, is now being developed by Regency Centers.