What is Othello Square? And who controls it? That depends who you ask.

Seattle Housing Authority has long owned an L-shaped, 3.2-acre site on the southeast corner of South Othello Street and Martin Luther King Jr. Way S. The site is a five-minute walk north to Othello Station. It has had various addresses and names.

EB-5 developer Lobsang Dargey's Path America had a plan to develop about 500 units near Othello Station on what was then known as the Southeast Economic Opportunity Center, but Dargey was later sent to jail for securities fraud.

SHA put no timeline or price on the deal.

HomeSight said it would pay $14.2 million for the land, and estimated that the four-building project would cost $203 million. Funding sources weren't specified beyond anticipated government sources, grants, tax credits, donors and foundations.

Now, on HomeSight's behalf, Weber Thompson and Spectrum Development Solutions are ready to show the initial plan for Building C at Othello Square. The address is 3939 S. Othello St.

Parcel C is on the northwest corner of the main north block, which it shares with Parcel B (the school) and Parcel A (a mixed-use building). The smaller Parcel D is south across South Holly Park Drive. Building C is the first component to enter design review. 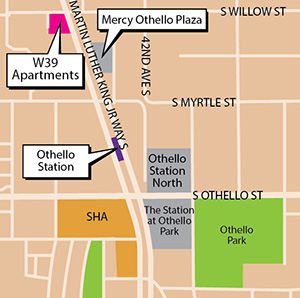 The seven-story Building C would have 175 units, priced for people at and above 60 percent of area median income (AMI). It would also house Seattle Children's Odessa Brown Children's Clinic and a daycare center. Underground parking for 102 vehicles would be accessed from 39th Avenue South, to the west.

HomeSight values the project at $78 million.

Midblock connectors and a courtyard on the north block will separate Buildings A, B and C.

Weber Thompson did the master plan, and says the charter school (Building B) will go first, and possibly open by fall 2019. NAC Architecture is designing the school at 3900 S. Holly Park Dr., which is described as a three-story building with 58,000 square feet, serving between 450 and 680 students. Structured parking for 15 vehicles is mentioned.

The Building B team is led by Washington Charter School Development, and includes Metrix Engineers. Green Dot, based in California, will be the school operator.

Buildings A and D

Barrientos Ryan is the developer for Buildings A and D.

Building A would be at 7301 Martin Luther King Jr. Way S., on the northeast corner of the main north block. It seems to be the least advanced in planning.

The basic program is for 200 units of mixed-income housing, community space and HomeSight Opportunity Center. Barrientos Ryan targets a fall 2022 completion date. No architect has been announced, and no new plans have been filed for the site, which is zoned up to 85 feet.

For Building D, at 7343 Martin Luther King Jr. Way S., HomeSight says that the condos will be priced at 80 percent of AMI. SKL Architects is designing the five-story building, which will include 2,618 square feet of retail/commercial space and one level of underground parking for 42 vehicles.

The west entry courtyard would be on the alley facing some of SHA's low-rise New Holly housing, in addition to an entrance on MLK. SKL is seeking a contract rezone from 40 to 55 feet.

HomeSight has developed 350 single-family homes and townhouse units since 1991, according to its website. In 2010 it also completed the 102-unit Pontedera Condominiums, at 827 Hiawatha Pl. S., with funding from the state, city and federal government.