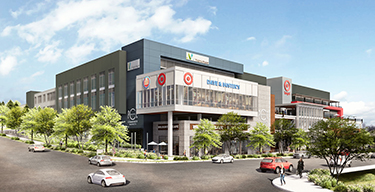 Image from KG Investment Properties [enlarge]
M2G is the architect of record for PCC, and Woodman Construction is the general contractor.

The 11-store natural foods co-op has been enjoying a growth spurt lately with new stores already in the works in Ballard, Madison Valley and downtown Seattle. A new Burien store opened last week, and the West Seattle store will reopen in 2019 as part of a new mixed-use project.

The other Eastside locations include Kirkland, Issaquah and Redmond.

PCC will take 26,600 square feet on the ground floor of the four-story project. Other anchor tenants include Target, Dave & Busters and Virgina Mason.

M2G is the architect of record for the PCC store, and Woodman Construction is the general contractor for PCC.

Fuller/Sears Architects, which was acquired by MG2 last year, is designing Wilburton Village, and Bayley Construction is the general contractor. Both firms were on the team for both phases of the development.

The first phase opened in 2016 in an 82,000-square-foot building with tenants REI, Home Goods and Trader Joe's.

Plans for the second, larger phase include a second-story parking level, 13,000 square feet of street-level shops, a plaza with outdoor seating, and a third-floor outdoor seating area.

Target and a 40,000-square-foot Dave & Busters restaurant will be on the third floor, along with a 8,500-square-foot tenant that is unnamed. The Target store, at 49,000 square feet, will follow that chain's smaller, urban format.

Virginia Mason will have a 45,000-square-foot clinic on the top floor, accessible at grade from Northeast Fourth Avenue or via a ramp from 116th.

Visitors will circulate through the building using outdoor escalators, elevators and stairwells. There will also be a “cartalator” to whisk shopping carts between levels.

“We are excited to begin construction on the southern phase of the Wilburton project to complement the north phase that opened in 2016,” said Jay Fisher, an executive at Principal Real Estate Investors, in a statement. “We feel the project will provide needed retail, entertainment and service options in a location easily accessible throughout the Eastside.”

The site is on East Bellevue's old Auto Row, a part of the city that's been redeveloping in recent years. Bellevue-based KG owns property north of the Wilburton development on 116th, meaning more development could be on the way.