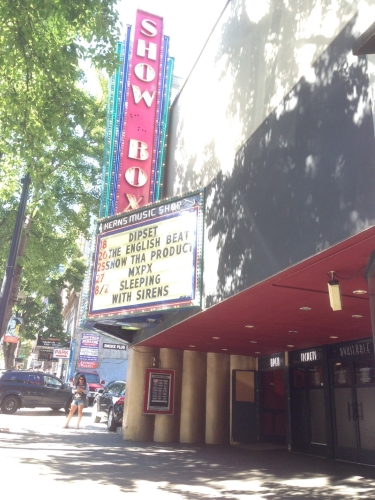 Photo by Brian Miller [enlarge]
Perkins + Will is designing the 442-unit tower for this site at 1412 First Ave.

Vancouver, B.C.-based Onni Group has filed plans to build a 44-story tower with 442 residential units on the Showbox property, at 1412 First Ave.

The team includes local firm R.M. Watson Co. and architect Perkins + Will, with the law firm McCullough Hill Leary as a consultant. R.M. Watson is a broker and banker who may be acting on behalf of the Showbox owner, or for the prospective buyer — which is presumably Onni.

Commercial space is planned. Underground parking on five levels for 88 vehicles is indicated, along with a bike room with 50 stalls.

The main 13,320-square-foot midblock site is south of a small parking lot, and north of the Poll building on the corner of Union Street. The property is not publicly listed for sale.

It is opposite but outside the Pike Place Market Historical District, and zoned for structures up to 440 feet.

The Perkins + Will plan highlights the parking lot, long owned by the Muscatel family. It totals 6,660 square feet, but is zoned for structures only up to 145 feet. That property isn't publicly listed for sale. It's possible that the developers intend to buy and combine the two properties. Or not. Or the Muscatel site's development rights could be in play.

Immediately north of the Muscatel lot, at Pike Street, a 14-story hotel is being planned on the site of the 1897 Hahn Building, aka the Green Tortoise Hostel.

The two-story Showbox building was constructed in 1916. It has 22,138 square feet, and is home to the Showbox night club, a pawn shop, the Blarney Stone pub and other tenants. Terms of those leases are unknown.

An LLC associated with strip-club magnate Roger Forbes owns the Showbox building. It last traded in 1997 for almost $2.9 million. Forbes also has an interest in Deja Vu, a block north on First, which is part of a national chain.

According to HistoryLink, the Showbox has been a music hall since 1939. The music programming and club name have changed over the years.

The Lyons family sold the building to Forbes in 1997, and the club to Jeff Steichen in 1996. Steichen sold the business in 2007 to AEG Live.

Onni is currently developing two former Seattle Times blocks. There will be two office towers with about 1 million square feet (including retail-commercial space); and two residential towers with 1,179 units, retail and underground parking.