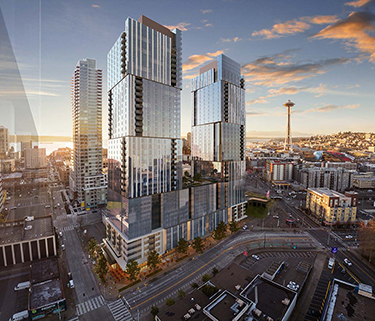 Clise Properties has sold its twin-tower Block V project, and the site at 2301 Seventh Ave., to Onni Group of Vancouver, B.C., concluding a deal that the DJC first reported in August.

Brokers were not announced. The transaction was worth about $2,025 per square foot, but that also includes the plans and most permits. The construction permit hasn't yet been issued.

Onni will build two high-rise residential towers designed by Graphite Design Group on the east half of the block, which is bounded by Sixth, Seventh and Bell and Battery streets. The site totals 38,880 square feet.

The previously approved Clise master-use permit was for 40-story towers. Onni intends to add 40 feet of additional height to the towers, plus more offices in the podium, using HALA incentives (the city's Housing Affordability and Livability Agenda). The revision has yet to be approved.

The new plan should yield 609 units, 543 parking spaces (both underground and structured) and 322,321 square feet of offices. There will also be about 10,500 square feet of retail.

Total project size is estimated at a little over 1 million square feet.

Meanwhile, on the west side of the same block, HB Management was planning BB6 on a site it owns at 2300 Sixth Ave. It will sell that high-rise project, also with two towers, for $60 million to an unnamed Canadian developer with a Beijing-based law firm. (Half of that sale has yet to close.)

The project will have 891 units, 72 hotel rooms, retail and underground parking. Some of the residential units may end up as condominiums.

Onni is currently developing two blocks it owns near The Seattle Times in South Lake Union, with four towers that will have about 1 million square feet of offices and commercial space, 1,179 residential units, retail and underground parking. Onni also is still pursuing the Showbox site on First Avenue downtown, where it could build a 44-story residential tower if landmarking and local opposition don't prevent the sale.