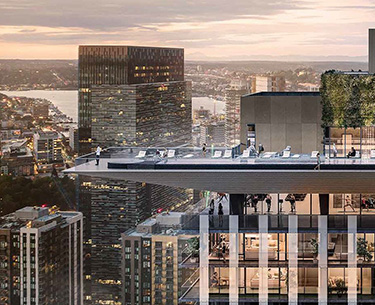 Renderings by James K.M. Cheng Architects [enlarge]
Earlier plans for a dome on the roof have been scrapped, but it will have a cantilevered swimming pool, a “sky garden” and amenity spaces. 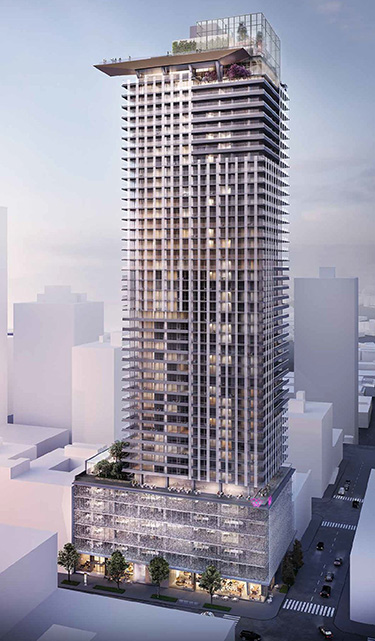 The rooftop dome is gone, the units have flipped from apartments to condos (as the DJC first reported), and now Third & Virginia is ready for its presumably final design review.

The project is an all-Canadian affair. The corner site at 2000 Third Ave. is owned by British Columbia Investment Management Corp., or BCI. Westbank is the developer. Graham Construction is the general contractor. James K.M. Cheng Architects is the design architect.

Total project size, including the parking, is listed as 679,211 square feet.

Notable changes since the last design review, in June 2017, include:

• No dome, but the roof will have a cantilevered swimming pool, “sky garden” and amenity spaces

• A separate new residential entrance on Virginia Street; office entry will be on Third

The 19,440-square-foot site is on the northeast corner of Third and Virginia, south of the YWCA. It's now a surface parking lot, though a temporary sales office is under construction there.

Condos were once contemplated on the site, some 18 years ago, before the recession and subsequent upzone. Depending on when it starts and finishes, Third & Virginia could face some significant high-rise condo competitors.

Here they are, in order of expected completion:

• Emerald, with 265 units in a 41-story tower now underway at 1613 Second Ave. Create World and Daniels Real Estate are the developer. It's slated for completion in 2020. Pre-sales won't begin until next year.

• Spire, with 352 units in a 41-story tower that just broke ground at 600 Wall St. Laconia Development and Chinese partner Vanke are the owners. It's targeting late 2020 for completion. A sales office is expected to open soon at 2218 Fifth Ave.

• Also in the high-rise condo pipeline are Bosa Development's Third & Cherry (aka Civic Square) with 500 units; Caydon Property Group's tower at Trinity Parish on First Hill (226 units); Daniels Real Estate's 800 Columbia, also on First Hill (270 units); and Pinnacle Plus Development's 1516 Second (aka the Chromer Building), with 498 units. None of those projects have permits or announced start/finish dates.