On the Block: The Bellevue upzone nobody's watching

Last night, the Bellevue Planning Commission was expected to approve, per a positive staff recommendation, an upzone around East Main Station.

The intermediate step follows last month's SEPA determination of non-significance and four years of process. The city of Bellevue says that council and public meetings will continue until a likely council vote in February to approve the upzone.

East Main Station is now under construction — like the rest of the East Link extension — so it can be a little difficult to conceptualize it and the rest of the route out to Redmond when you can't see them on Google Maps. (Pro tip: Try satellite view.)

However it's real, and the expected upzone of a 65-acre expanse west of Interstate 405, now limited to 75 feet, will have a very real effect on Southwest Bellevue.


East Main Station will be near the southwest corner of Main and 112th Avenue Southwest, opposite the Red Lion Hotel and Hilton Bellevue. The transit oriented development (TOD) area extends south from Main, bounded by 112th and the freeway, to Southeast Eighth Street.

[enlarge]
This is an example of how the Red Lion site could be redeveloped.

Most of it is privately held. Some of it is wetlands and can't be developed. Everything west of 112th, i.e. the Surrey Downs neighborhood, will remain single-family residential.

What the city calls the primary TOD area — north of Southeast Sixth Street — would be zoned for construction up to 300 feet, though only the very north end might see buildings that tall.

The main parcels affected are the Red Lion and Hilton, recently acquired by local Wig Properties; and the Bellevue Club, long owned by a local partnership.

The secondary south TOD area, between Sixth and Eighth, would be zoned for construction up to 120 feet. That's where Sturtevant Creek constrains development and the city foresees fewer new building opportunities.

Two older office complexes there are owned by Principal Life Insurance (Lincoln Plaza) and Talon Private Capital (Gateway I). The Marriot Residence Inn property, opposite the Wilburton Park & Ride, is owned by a Florida investment trust.

Now forget about the south TOD area; we're only going to talk about the north area from this point forward.


Bellevue convened a Citizens Advisory Committee in 2014 to consider and shape the upzone; the council approved the committee's recommendation in 2016. This week's meeting is a preparatory step to amending Bellevue's comprehensive plan — when it finally becomes law, and developers can work with it.

East Main Station is expected to open in 2023. It'll be the middle stop between South Bellevue Station, at the existing Park & Ride (the swampy area by Mercer Slough where no development is planned), and Bellevue Downtown Station, where high-rise zoning is already in effect and many nearby projects are in the works.

The family-run Wig Properties will likely be the first and most prominent player in redeveloping the north TOD site. It has assembled 15.5 acres: first paying $35 million for the older Red Lion in 2015; and then paying $84 million in 2016 for the newer, larger Hilton to the south.

Wig has an operating agreement with Red Lion of Spokane, which runs another few years. The city's hypothetical renderings show the 6-acre Red Lion site being redeveloped first. Its five two-story buildings, with 161 rooms, date to 1969.

Wig Properties was founded by Manhohan “Mon” Wig over three decades ago. The company declined to provide specifics, but says it doesn't intend to sell. 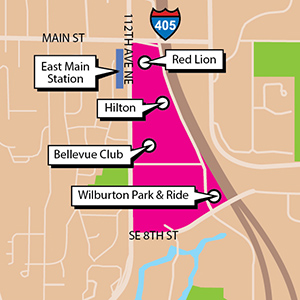 The firm has plenty of experience in developing and managing low-rise retail properties. It previously bought and redeveloped a 19-acre JCPenney warehouse property now called Southcenter Square. And it has 250 acres in Lacey that it intends to develop as The Gateway, with 320,000 square feet of retail and commercial buildings.

Wig's website shows a fanciful rendering of a mixed-use redevelopment for the Red Lion site. No architect or potential development partner are named, but Wig says the future team will have high-rise experience.


For now, the only active project near East Main Station is Alliance Residential's planned midrise Holden Bellevue, with 136 senior units at 121 112th. Alliance doesn't yet own the site, which now is home to an old dental office.

Also, it's worth noting that just north of the East Main Station TOD area, in an area that was upzoned last year, the six-story Sheraton Bellevue will benefit from the light rail, too. The 1979 hotel sits on almost 4.8 acres. Two years ago, PMF Investments of Bellevue paid $42.7 million for the property. Like the Hilton, it has large parking lots facing 112th, and two small restaurant buildings, Bellevue Grille and Azteca, that could easily be removed.

However, PMF and CollinsWoerman's redevelopment plan with a possible five buildings, some potentially up to 20 stories, ran afoul with the city in 2016. Some of those towers might block the views of Bellevue City Hall, a little northwest up 112th. That plan hasn't yet entered the review process.

But PMF's Brian Franklin says that the potential view corridor provision has been dropped, and that the family-run company will show a phased development proposal early next year that could eventually total 1.3 million square feet.

Phase I, timed to the opening of light rail service, would leave the existing hotel in place, but likely replace the two restaurants.

The Wigs probably won't be far behind with their Red Lion plans.