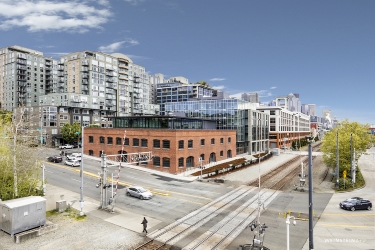 Photo by Andrew Nam/Weinstein A+U [enlarge]
The designation comes on the heels of a renovation and apartment addition.

The Seattle City Council recently approved the landmark designation ordinance for the Ainsworth & Dunn building at 2815 Elliott Ave. near the waterfront.

The 1902 building was designed by Stephen Alston Jennings. It was originally constructed by the Seattle salmon-packing firm Ainsworth & Dunn as a warehouse to operate in tandem with the newly built Pier 14 (now Pier 70) directly across the way, the city's Department of Neighborhoods said in a press release.

The controlled features in connection with the landmark status are the exterior, the exposed interior heavy timber structural system on the first floor, and part of the site adjacent to the west side of the building.

The building was the longtime home of the Old Spaghetti Factory. That restaurant closed in late 2016.

Meriwether Partners renovated the two-story building and added a third floor and a 3,500-square-foot patio. Now called A&D, it has 32,500 square feet of office space — all leased to co-working firm Spaces.

Meriwether also built 62 apartments in a new six-story building it calls 10 Clay on the south end of the block. The apartment mix is studios, open one-bedrooms, one-bedrooms (including some with dens) and two-bedrooms.

Weinstein A+U was the architect and Walsh Construction Co. was the contractor.

Meriwether started leasing the apartments in May and said they are now over 50% leased. Rents average around $4 per square foot.

10 Clay also has two retail spaces and a restaurant space totaling about 7,200 square feet. The leasing agents are Damian Sevilla and Jason Miller of Kidder Mathews.

A 61-stall parking garage runs under the building and A&D.

The city's Landmarks Preservation Board approved the nomination, designation and controls and incentives agreement for the Ainsworth & Dunn building, and Department of Neighborhoods staff provided the draft ordinance to the City Council. The final step in the process was council approval.

The department's Historic Preservation Program is responsible for the designation and protection of more than 400 historic structures, sites, objects, and vessels, along with eight historic districts.