Puyallup Tribe gets ready to open $400M casino in Tacoma 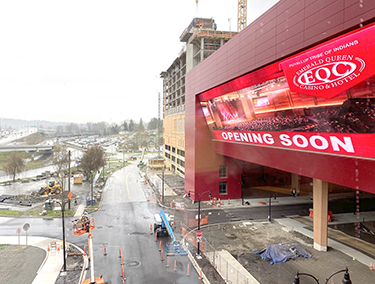 Images from the Puyallup Tribe of Indians [enlarge]
A massive 32-by-147-foot LED screen faces I-5. 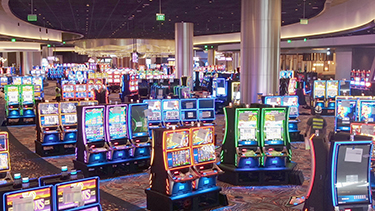 [enlarge]
Over 2,100 video slot machines are nearly ready for gamblers.

The Puyallup Tribe of Indians for 15 years has been planning a glitzy new casino to replace its current offering in Tacoma consisting of a former bingo hall and three giant tents.

All that waiting is about to pay off, as the tribe this spring will open its new $400 million Emerald Queen Casino that some are calling the Las Vegas of Puget Sound. Although an official opening date hasn't been announced yet, crews are finishing installation of fixtures, furnishings and equipment in the 310,000-square-foot casino adjacent to Interstate 5, between Portland Avenue East and East R Street. An article last month in The News Tribune said it would open in March.

Gamblers will be attracted by the glow of 2,100 slot machines and dozens of table games. But the casino isn't all about gambling — there is a 2,000-seat concert venue and events center, five restaurants, and an assortment of traditional and contemporary artwork from Puyallup tribal members. The eateries include a buffet, a fine dining restaurant and a sports bar with over 50 tabletop slot machines.

The tribe says the casino has over 200 bathroom stalls and multilevel garage parking for about 1,300 vehicles. There also is a high-tech HVAC system that uses natural air flow and movements to remove smoke from the building without using as much energy as a traditional HVAC system.

This casino has something less common than in other casinos: windows. Those windows allow guests to take in views of Mount Rainier and downtown Tacoma. They also channel light into the building to highlight wood carvings and natural elements inside.

A 4,700-square-foot LED screen on the exterior is a nod to Vegas while a traditional basketry design on the outside walls pays homage to the tribe.

Construction crews earlier this month installed the final beam for an adjacent 12-story hotel that will serve the casino with 170 rooms and more than half of the 1,300 new parking stalls. It is expected to open mid-year and will have additional conference space and a rooftop restaurant.

The casino's biggest winner might be the local economy: The tribe estimates the casino will have a $1.5 billion economic impact over the next 10 years.

The tribe will close its old Tacoma casino when the new one opens and will keep its other casino in Fife that is about 4 miles away and also faces I-5.