By BRIAN MILLER
Real Estate Editor
Photo by Brian Miller [enlarge]
Excavators from Rhine Demolition have been clearing a site in Pioneer Square to make way for an eight-story building with 80 units of supportive housing. 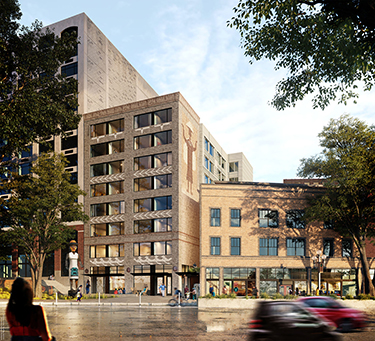 The area has been fenced off, and excavators from Rhine Demolition have been chewing away at the century-old, two-story yellow building. It was known over the past decades, under prior owner Catholic Housing Services, as the Lazarus Day Center, Leroy Helms Center and/or Harbor Lofts/Harbor Lights building.

Jones & Jones is the architect for the mixed-use replacement building.

Chief Seattle Club is based next door to the south, in the Monterey Hotel building at 410 Second Ave. S. Extension, where other future tenants can also be served. (That building was renovated by Jones & Jones about 15 years ago.) Both properties face Fortson Square, the triangle at Second and Yesler Way, where a new Native American-themed public art installation is also planned.

The new eight-story building will have a gallery, cafe, medical clinic and amenities on the ground floor and basement/mezzanine levels. On levels two through seven will be about 80 units of supportive housing. A roof deck is also planned.

The majority of the apartments will be for tenants who were formerly homeless, with the rest intended for very-low-income renters, HUD Section 8 recipients and those earning up to 30% of area median income.

The site, bounded by an alley to the east, totals about 6,400 square feet. Total project size is around 53,000 square feet. Completion is anticipated by 2021.

The old and new buildings will be separated by about 10 feet, though with a new joint entry vestibule between them. Above that, on its south facade, the new building will feature a brick-pattern mural depicting a traditional welcome figure — echoing the large wood sculpture planned outside by Puyallup tribal artist Shaun Peterson.

Prior funding applications indicate the budget will be around $30 million, with sources including Seattle's Office of Housing, King County, Washington State Housing Finance Commission, tax credits and a capital campaign.