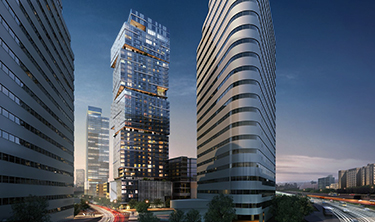 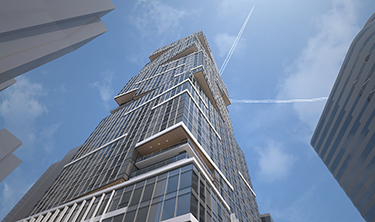 Weber Thompson has updated the design for Nexus, a 40-story condo tower proposed for 1200 Howell St. in the Denny Triangle.

A Seattle design review board will hold a recommendation meeting tonight at 7 p.m. in Seattle City Hall's Room L280.

Vancouver, B.C.-based Burrard Group wants to construct a 374-unit high-rise with street-level retail. Parking for 316 vehicles is planned on 12 levels, including five that would be above grade.

The most noticeable changes involve the seven-story podium. The design board complained during an earlier review that the podium “felt cold and lacked human scale or context,” according to a summary by the project team.

Changes include an extension of the curtain wall system from the tower down to the podium, and the addition of curved, vertical fins that wrap around parts of the building. Architects said the curtail wall system will smooth the tower's visual transition to the street while the fins add interest and dimensionality.

Architects also plan to add more overhead protection for pedestrians. Woodgrain material would be added to the soffits under the tower's “rotating box” structures to give them more warmth.

Realogics Sotheby's International Realty is marketing Nexus. It announced that more than 80 percent of the condos have been reserved by potential buyers. Prices will range from the low $300,000s to more than $4 million.

Burrard Group acquired the 14,400-square-foot site for $14.95 million in May. The developer said earlier this year that it hopes to break ground by the end of the year and open to residents in 2019.