By LYNN PORTER
Journal Staff Reporter
[enlarge]
Since the farm opened in 2012, 30,000 pounds of food has been grown with help from over 2,000 volunteers.

The Rainier Beach Urban Farm and Wetlands is expanding so Seattle Tilth can grow more food and teach more people about urban agriculture and environmental stewardship.

The farm is jointly operated by Seattle Tilth and Friends of Rainier Beach Urban Farm and Wetlands.

Berger Partnership is the landscape architect, Cast Architecture is the architect, and A1 Landscaping and Construction is the contractor.

Four greenhouses will be added on the seven-acre site, as well as a farm stand, children's garden, rain gardens and hand-crafted wetland markers. There will also be a commercial kitchen, office space, a classroom, and a circle drive for school buses, delivery vehicles and physically disabled visitors.

Liza Burke is communications director for the nonprofit Seattle Tilth, which manages the farm's programs and operations.

She said the farm is a engine of learning for the community — a place where people can connect to the natural world and food. “That learning is really important for people to be able to experience in the city,” she said.

Since the farm opened in 2012, 30,000 pounds of food has been grown there with help from over 2,000 volunteers, Burke said. Funding comes from individuals, United Way, PCC Natural Markets, Seattle Tilth and foundations, including the National Fish and Wildlife Foundation, Sustainable Path Foundation and Satterberg Foundation.

Friends of Rainier Beach Urban Farm and Wetlands does funding and outreach. 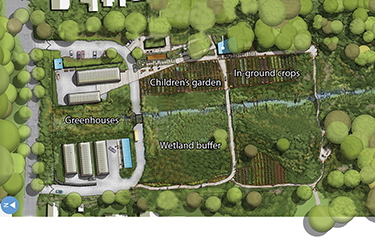 [enlarge]
Four greenhouses will be added as well as a farm stand, children’s garden, rain gardens, a commercial kitchen, office space and a classroom.

The food is sold at Columbia City Farmers Market and through a community-supported agriculture program where people pay a membership fee and get produce every week, said Burke. The food also is used for meals at Rainier Beach Community Center and cooking classes, and is sold to low income families at below-market rates.

In the future, food will also be sold from the new farm stand, where people can use food stamps, said Burke. Restaurants will also be able to buy it.

Burke said the new commercial kitchen will be used to prepare vegetables and fruits, and for group classes. New greenhouses will help increase production.

The city used the farm site to grow plants for parks until 2010, said Betsey Curran, deputy director of Seattle Parks Foundation. Then the community said it wanted an organic urban farm and wetlands education program there, said Curran, whose organization managed the capital campaign for the expansion.

Curran said the expansion funds come from the city, King County, the state and private donations.

(This story has been changed to say that the farm is jointly operated by Seattle Tilth and Friends of Rainier Beach Urban Farm and Wetlands.)