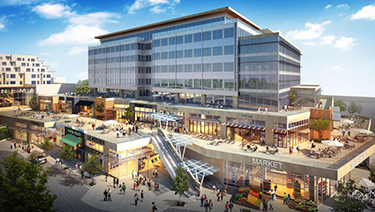 The broadband services company Wave said it has finalized a 10-year lease in Kirkland Urban.

Talon Private Capital and Prudential Real Estate Investors are developing the 1.2 million-square-foot complex on an 11.5-acre site in downtown Kirkland.

Wave will occupy about 88,000 square feet on three floors in the eight-story Urban Central building.

Talon Principal Jim Neal said the first phase is slated to open in the first quarter of 2018.

Wave won't be moving very far. Its headquarters are next door in Kirkland Parkplace, where it has 42,000 square feet for 450 employees. Wave has more than 1,300 employees companywide.

A spokesman for Wave said the company has not hired an architect yet.

The project team for Kirkland Urban includes CollinsWoerman, Weber Thompson, Hewitt, and Ryan Cos. of Minneapolis.

Another big Kirkland Urban tenant will be Tableau Software, which said in January that it leased 92,000 square feet on three floors.

Talon declined to name other tenants.