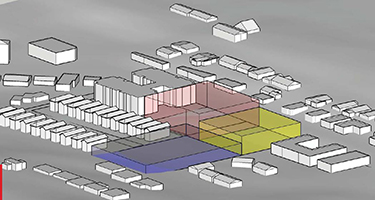 Rendering by SMR Architects [enlarge]
Other zoning alternatives are being explored, so the final number of units and parking spaces is uncertain. 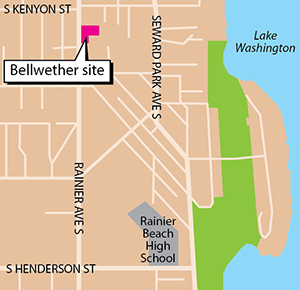 Two years ago, Bellwether Housing completed assembling a two-acre site at 7930 Rainier Ave. S. It had bought the smaller, vacant south portion in 2007 for $1.4 million, then paid almost $3.2 million in 2016 for the larger north parcel, now home to Life Change Church.

A new plan filed by SMR Architects shows Bellwether is proposing up to 137 units of permanently affordable housing in a five-story building. It would also have some commercial space, probably a childcare center, facing Rainier.

Total project size is estimated at around 172,000 square feet. There would be one level of underground parking for up to 153 vehicles.

The property is close to Lake Washington and Pritchard Island Beach, and near Rainier Beach High School. The two parcels fall into three zoning areas, so Bellwether is requesting a contract rezone to a 55 feet, including MHA incentives.

However, the preferred design scheme shows the building would step down in height from Rainier to the east, which borders single-family housing.

Other zoning alternatives are being explored, so the final number of units and parking spaces is uncertain.

According to project notes, Bellwether hopes to begin the review process this year, apply for permits late in 2018 and begin construction in early 2020.