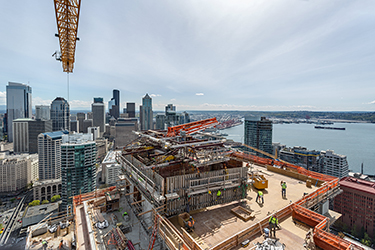 Photo by Francis Zera Photography [enlarge]
The 344-unit Arrive is next to the Cinerama and the monorail.

Arrive, a 43-story mixed-use apartment and hotel tower, recently topped out at 2116 Fourth Ave. in Belltown.

The Molasky Group of Companies of Las Vegas and Binjiang Tower Corp. of Hangzhou, China, are partners on Arrive, which is expected to open in early 2019.

Molasky is the development lead on the project, and said the total cost will be $225 million.

The 543,000-square-foot Arrive is next to the Cinerama theater and the monorail. It will have 344 luxury apartments and The Sound Hotel, a 142-room Tapestry by Hilton hotel. Parking for 177 vehicles will be on seven subterranean levels and 1,824 square feet of ground-floor retail are planned.

The rooftop terrace will have landscaping, fireplace and bi-fold wall panel at the amenity counter.

Cary Kopczynski & Co., the tower's structural engineer, said in a press release that the Fourth Avenue podium facade will have a unique steel and glass panel LED light box wall between levels two and six. The exterior design includes a contemporary facade with a glass window wall system and composite metal panels.

The structure is cast-in-place concrete with post-tensioned floor slabs. To meet demanding seismic requirements, CKC said it designed a dual-core system that will save time and money.

The project was formerly known as Potala Tower. Molasky and Binjiang Tower Corp. acquired it in 2016 through an agreement in U.S. District Court, after the original developer, Lobsang Dargey, was charged with securities fraud and other offenses. Binjiang was an original investor in Potala Tower.