Project of the Month: Suburban school with a Zen garden at its heart 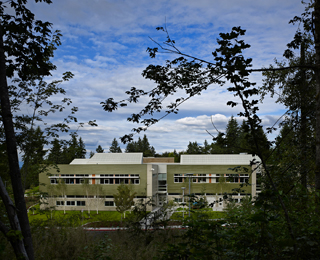 Ardmore Elementary School is a low one story in the front, welcoming and well blended with its single-family neighborhood in Bellevue. Lap-sided walls alternate with masonry block.

But step inside and the school reveals a heart of pure Zen. The entry leads to an inner corridor that’s really a bridge. The floor drops away to reveal a new, lower level and a large, bright library and meditative courtyard.

The architects at NAC|Architecture were inspired by the sayings of Ardmore school librarian Jan Dubois: “Openness inspires trust.” And, “Literacy is at the core of learning.”

It’s a very “introspective” building, according to project designer Boris Srdar. “The idea is that the energy is on the inside.”

The openness of that interior is breathtaking. Abundant light in the library comes not from perimeter walls but from a large skylight overhead. Light also washes in through a two-story glass wall with an enclosed outdoor space on the other side. Kids regularly flood into the courtyard for activities or just to let off steam, perching on the edges of a sunken Zen garden or benches next to a single maple tree.

The previous building dated from 1968, and an era when school architects were experimenting with abstract geometries that had little connection to the needs of people inside the building. In this case, it was hexagonal “classrooms” inside one open-plan hexagonal building, with mostly solid outer walls. NAC|Architecture managing principal Kevin Flanagan called it “the honeycomb hideout.”

In trying to keep their students’ attention, teachers had adapted by keeping their voices low so as not to disturb neighboring classes. Not that the teachers wanted to say goodbye to all that. They liked the openness and connection — but needed a little more functional definition of space.

“They had camaraderie, and they did not want to be put into little boxes,” said Flanagan. “We decided to put the library in the middle — but make it a connector, not a separator.”

A ring of Ls

Kyle McLeod managed the project for the school district. McLeod is a graduate of Ardmore, and he remembers how important the grassy hill in back was to the community on snow days, when it became a center for sledding and early ski education. It still is.

The original building was all on one level, but the program for the new building called for about twice the space. Building on two levels allowed the school district to reserve an important part of the site: the ski hill and natural areas.

Topography plays a role. The building steps down from front to back for a low profile in front and drama in the middle, including the well-used library and courtyard. To hold back the hill, there’s a retaining wall incorporated into the building. There’s a second courtyard just for light and plantings.

In plan, the building is a series of “Ls” joined together in a ring. When one of the students tried to figure it out, he called it an “electric doughnut,” Flanagan remembers. The compact form is great for energy conservation, he said, and “no one is at the end of a hallway.” A traditional gym and a multi-purpose room with plenty of daylight are incorporated into the plan.

As per teachers’ wishes, the new classrooms are enclosed and rectilinear, but also light and open. Views of the largely wooded perimeter fill the building, and glass panels in inner walls give the ring of corridors a very open feeling as well.

A shifting of axes between the outer ring of classrooms on the perimeter of the building and an inner ring of restrooms and service areas makes for pleasant angles and a gallery-like corridor where student work can be admired.

It was McLeod’s idea to have students, exiled to another site during the construction of their school, write their names on an I-beam before it was hoisted into place over a stairwell. And it was the architects’ idea to place a window on an interior wall right next to it so that students in the hallway can look up and see a piece of structure — and some history. 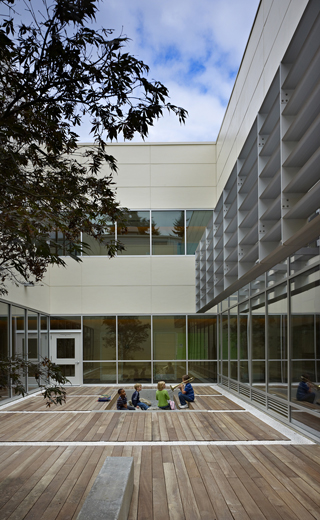 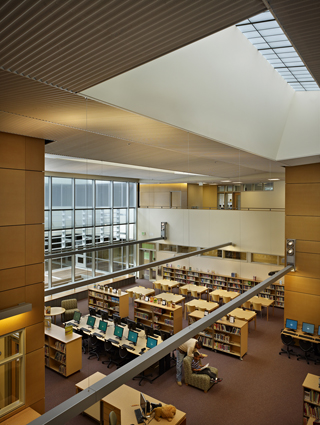 Photo by Ben Benschneider [enlarge]
The floor drops away in the heart of the school to reveal the library. Most of the light comes from the adjoining inner courtyard. 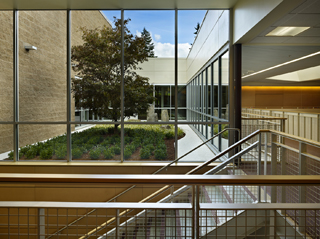 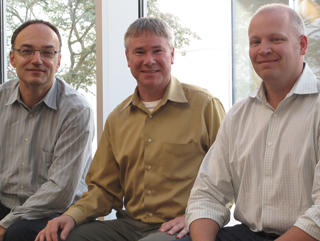 As a school district with affluent suburbs, Bellevue may have an enviable budget, according to McLeod, but some of the year-to-year generosity is due to the policy of building very “green.” As shown on a table of “energy use intensity,” a measure that compares energy use across the board (including gas and electric sources), Ardmore is the most energy efficient building in the district. Its EUI number is 18. Most new schools are over 40, according to McLeod.

Geothermal heat helps. There are 70 geothermal wells in the sand field out back, and they’ll pay for themselves in 10 to 14 years. Building this way takes more out of the capital budget, but it leaves more of the year-to-year budget for operations and materials on the table, said McLeod. Administrators, teachers and school boards like that.

Just above the hill and extending to the side of the school, there’s the usual paving and grassy soccer field. But there’s a new type of play equipment and it’s interactive. As you might expect from a school that’s just a stone’s throw from the main campus of Microsoft, there are computer chips inside, and tiny screens where kids get feedback on their individual and collective performance. According to McLoed, the kids love it.

“The daylighting design for this project is outstanding. There is abundant, diffused daylight throughout the school … This is a school design that does not speak down to children with gratuitous or playful design manipulations; instead, the building has a calm aesthetic, with restrained material and color palettes.”

The Project of the Month is sponsored by the Daily Journal of Commerce and the Seattle chapter of the American Institute of Architects. The Project of the Month was selected with the assistance of architect Matt Aalfs, development consultant John Finke, architect and artist Anita Lehman, and architect Matt Rumbaugh. For information about submitting projects, contact Isla McKetta at AIA Seattle at (206) 448-4938, or imcketta@aiaseattle.org.