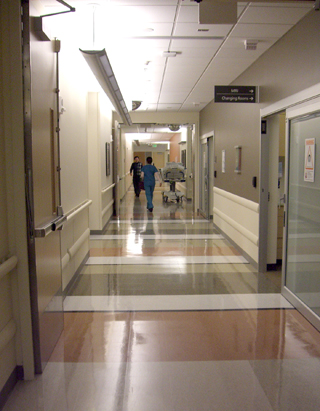 Moisture in concrete slabs can be a big problem on a project, especially when flooring is installed. Even when epoxies are applied over the slab to protect vinyl floors and carpet from moisture, buckling and mold can occur.

Greg McKinnon, operations manager at Stoneway Concrete in Seattle, said hundreds of millions of dollars are spent annually to correct moisture-related problems in flooring, such as failure of adhesives, damage to floor coverings, salt formation, and the growth of mold and mildew.

A new quick-drying concrete called Aridus developed by U.S. Concrete in Houston promises to avoid such problems. The name means “dry” in Greek.

Stoneway Concrete announced in January it has an exclusive licensee agreement with U.S. Concrete to market and produce Aridus in the Northwest.

The proprietary mix reduces drying time and the risk of excess moisture vapor in concrete slabs. This means flooring can be installed faster and more effectively. Developing and testing the product has taken six years, according to the U.S Concrete website.

Aridus costs $4 more per square foot than standard concrete, but that money is refunded if the product doesn't achieve the promised relative humidity in 45 days.

U.S. Concrete said its tests showed the product will be ready for flooring less than 30 days after the building is water tight. Finishers can use any standard finishing method.

“The problems with excess moisture started with low-VOC adhesives,” said McKinnon. “They're water soluble, so the moisture in the concrete can migrate to the flooring.”

Typically contractors prepare a slab and then top it with epoxy to prevent any moisture from reaching the flooring.

“It takes about a week for the topping to dry and costs between $7 and $9 a square foot for 10,000 square feet of flooring,” said John Pittman, senior superintendent with Mortenson Construction. The Bellevue contractor was among the first to try the product here, using it on some slabs at Providence Medical Center in Everett. The $500 million medical facility opened last year.

“We needed the slabs to dry faster in order to maintain the schedule,” Pittman said. “The finisher said the mix was a little stickier than normal, but it looked great.”

The product has an added benefit if the building owner decides to replace the flooring during a tenant improvement project: No vapor barrier between the concrete and the flooring has to be removed, and none has to be installed.

The product is recommended for use in schools, hospitals, data centers, retail, offices and home additions. Projects that are in very wet or very dry climates, or that have slabs close to a water table would also be candidates.