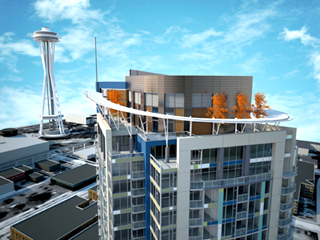 The city has approved a master-use permit for the slender tower and construction is scheduled to begin in May of 2008. It all goes smoothly, it should be finished in November of 2010.

Parking will be provided in 10 levels below grade and two above. Some stalls will have mechanical systems so that two cars can be stacked in one space. There will be one stall of parking for every bedroom in the building.

The tower will have punched decks between various juxtaposed forms. Precast concrete architectural frame features will break up each façade. The top will have a garden deck and a “halo element” that glows at night.

Citibank made a proposal to finance Icon and an agreement is being finalized with a general contractor, according to Paul Menzies of Walnut Creek, Calif.-based Levin Menzies.

Levin Menzies is also developing a 331-unit condo tower at Eighth and Seneca, east of Freeway Park. Construction on that is expected to start in March 2008 and finish in May 2010. It will cost about $85 million to build and is being financed by Lehman Brothers of New York.