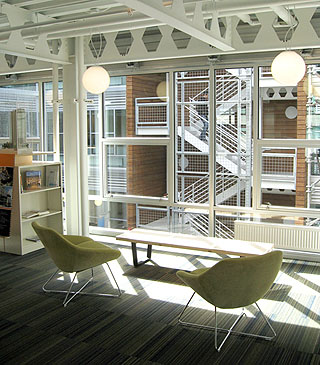 Photo by Weber Thompson [enlarge]
Structural materials were used as finished surfaces, with ducts and piping exposed. The outdoor stairwell was designed to encourage people to use it.

Before Weber Thompson started work on its new office, principals surveyed their 84 employees and asked what they wanted most. The answer was resounding: natural ventilation and maximum daylighting.

“Those were the driving forces to get this going,” said senior principal Scott Thompson.

After just a week in their new office at Terry Avenue and Thomas Street, Thompson said they can feel the difference.

“Just the morale of the people getting in here, it's pretty extraordinary,” Thompson said. “They like the idea of having more connection (to the outside).”

The 40,000-square-foot Terry Thomas building is owned and was developed by First Western Development and is managed by Stephen C. Grey & Associates. Weber Thompson occupies 25,000 square feet and the firm's three senior principals are all minority owners in the building.

General contractor was Rafn Co. and DCI Engineers was civil and structural engineer. 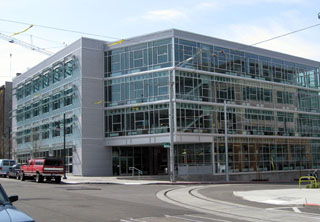 A courtyard in the center acts as a thermal chimney, with louvers helping to draw hot air out of the building. A highly reflective roof and sunshades help to keep heat out.

Thompson said all the passive cooling elements plus the hot water heating system cost about $300,000 more than it would have cost to build a traditional HVAC system. That's less than 3 percent of the project's $10.3 million construction costs, and total energy savings are estimated at 30 percent.

Repeling heat from the building had to be balanced with maximizing daylight, Zielinska said.

Based on modeling done by the mechanical engineering firm Stantec Consulting, the sunshades and blinds will block about 85 to 90 percent of the sun's heat, while 40 percent of the sunlight will still be transmitted inside. Having a central courtyard means that light enters the building from both sides, with narrow floor-plates of about 36 feet. Inside, surfaces are light-colored, and walls and ceilings are painted white to help minimize the wattage needed to light workspaces.

All lighting is on dimmers and turns off when there is enough daylight. Specially designed light-globes by Flux also use compact fluorescent bulbs on dimmers. Desks are positioned away from windows so workspaces won't get overheated.

Based on Stantec's thermal modeling estimates, the interior will be above 85 degrees for about 20 hours a year. Thompson said employees will likely shift their hours and wear cool clothes on the hottest summer days.

“We have to adapt,” said Principal Peter Greaves, lead designer for the interior. “We spent a long time using the buildings to manipulate the climate and create a hermetically sealed environment.” 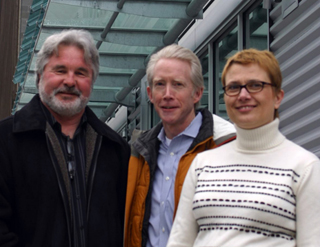 Another major goal was minimal use of materials. Structural materials were used as finished surfaces, with exposed ducts and pipes. The finished floors are concrete structural slab. On the ceilings, castellated steel beams with punched centers use less steel and promote cross-ventilation.

Ninety-three percent of the material from the 1920s light industrial building that previously sat on the site was recycled or reused. Old brick and timber was sold, and a large section of the old fir flooring is displayed as an art piece in the entry.

Greaves said they had to buck some conventional wisdom to keep material use down. For example, conference rooms typically have lots of insulation and dropped ceilings for soundproofing. Instead, Greaves suspended Prego panels — used in theater walls — over the conference table to trap sound. The conference room walls are lined with Homasote, a material made of recycled newspapers that absorbs sound while also serving as a corkboard for push-pins.

Another example was eliminating one elevator. Designers made stairwells bright and colorful to encourage employees to use them.

They expect to receive a LEED platinum rating for the interior and LEED gold for the core and shell. But there were some green elements they couldn't afford, like a green roof and gray-water recycling.

Thompson said a green roof without water capture would have given them the same LEED points as the reflective roof they used, so they couldn't justify the extra cost.

They hope to add solar panels to the roof in a few years, but they could not immediately justify the cost. Thompson said the building's vertical duct-work chases will make it easy to install solar panels in the future. Meanwhile, they are buying wind power and will plant trees every year to offset their carbon footprint.

The firm will closely scrutinize its energy use over the next few years, Thompson said. Having Stephen C. Grey & Associates as manager of both their previous and new office will let them compare the numbers more easily, he said.

Maybe the most important number, Greaves said, is how much the natural light and ventilation improve employee happiness and productivity. He said that has been roughly estimated at 10 percent.

“That is a huge increase in the bottom line,” Greaves said. “We hope to have even more than that.”