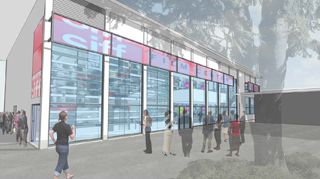 Rendering by Owen Richards Architects [enlarge]
SIFF will make its permanent home at Seattle Center, remodeling the 1962 Alki Room to house offices, classrooms, screening rooms, a 100-seat theater and a library. Construction is scheduled to begin this fall.

The Seattle International Film Festival plans to move next year to a permanent home at Seattle Center that will give it enough room during the festival, as well as space for year-round classes, events and screenings.

SIFF is in the midst of a $3 million capital campaign that also funded the 390-seat SIFF Cinema, which opened in 2007 at McCaw Hall. The group has raised a little more than half of the $3 million, including grants from Seattle and King County.

The film festival is the longest running, largest and best attended film festival in the country, according to SIFF. But SIFF Managing Director Deborah Person said not having a permanent home has meant moving the offices every three or four years, and spending about $12,000 a year renting and outfitting satellite space for the festival.

“We have been professional nomads for most of our history,” Person said. “The desire to have a permanent home has been on the agenda for more than a decade.”

The obstacle, Person said, has been finding permanent space the organization can afford. The city stepped up a few years ago, providing $350,000 in matching funds in its 2006 budget to help SIFF open the SIFF Cinema in 2007 at McCaw Hall and to help with the Alki Room renovation. SIFF also got $150,000 from King County 4Culture.

The SIFF Film Center will let the organization welcome the community to its space for the first time, Person said. Classes, lectures and screenings will be offered there year-round, including the Screenwriters Salon program. SIFF also plans to expand its educational program and make its archives open to the public.

“The overreaching reality is that it allows the festival to continue,” she said. “We really saw that the stability of the organization, if it continued to just depend on the 25 days that (the festival) happens, it was in danger of not being sustainable.” 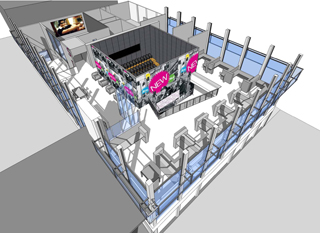 Rendering by Owen Richards Architects [enlarge]
The new SIFF Film Center is designed around the concept of an artistic incubator, with a 100-seat screening room at its center, surrounded by flexible spaces and open floor-plans.

Construction is scheduled to begin in the fall, with work slated for completion in time for the 2010 film festival in late May. That plan is contingent on getting the rest of the funding.

Person is optimistic: If half of the 80,000 people who consistently attend the festival every year give $35 each, they'll be set, she says.

The new location will help SIFF increase its visibility and cross-pollinate with similar organizations, said architect Owen Richards. The Alki Room is right next to the Vera Project, a youth-run arts and music center, which also got city help to open at Seattle Center. It's also near SIFF Cinema, Seattle Repertory Theater, Intiman Theater, Seattle Opera, Pacific Northwest Ballet and Seattle Symphony Orchestra. The building needs some work, Richards said, but it has an excellent structure and exterior architecture. The Alki Room was designed in 1962 by Paul Thiry for the World's Fair. It has a glazed exterior and overlooks the International Fountain. But a 1980s interior remodel enclosed the once-open mezzanine in drywall and added heavy oak trim. The remodel involves removing much of the drywall to reopen the space, and revealing the building's original railings.

“In a way this is one of these cases of finding a way to reuse this building that has inherent qualities,” Richards said. “This was kind of an ideal fit for the Seattle Center.”

Flexibility is central to the design. Richards said the layout is designed around the concept of an artistic incubator at its center, an enclosed 100-seat theater to be used for screenings, lectures and classes. Open floor plans will surround the screening room on two floors.

The illuminated outer walls of the theater will be clad in SIFF's poster graphics, changing each year with the festival. The screening room uses balcony seats salvaged from the old Seattle Cinerama.

Surrounding offices and other spaces will be designed with almost entirely open plans to maximize views.

The layout is designed to be flexible, allowing for the change in activity and space needs during the festival, and during screenings and other events. For example, a 750-foot space on the mezzanine level of the building will primarily serve as an educational center, but can also house smaller screenings, temporary classrooms or festival volunteers and staff.

Outside, the building's linear glass sunscreen will be enhanced to improve shading, and could include a display that let SIFF change graphics based on current events and screenings.