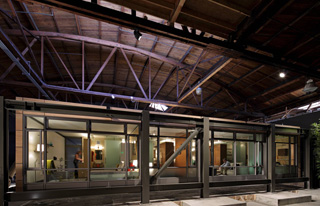 Photo by Doug Scott [enlarge]
The architecture firm has started Sustainable Living Innovations to sell its new design and technology. SLI says developers can use it to build low-rise concrete and steel structures for about the same cost as wood-frame.

In the last development cycle CollinsWoerman designed buildings in Seattle and Bellevue with more than 2,000 apartments and condos.

Then the recession hit.

“After Lehman (Brothers Holdings) went bankrupt we said ‘we could be out of work,” said Arlan Collins, a principal with the Seattle architecture firm. “It was the fear of ‘what do we do?'

That fear prompted the firm to invent a new approach to design and construction that would appeal to cost-conscious developers and consumers, and give it a competitive edge.

“The price-point at the end of the last cycle was just outrageous,” Collins said. “It was just too expensive. We wanted to bring the price way down.”

Collins said they have devised a radically new concept that will be unveiled at a press event on Wednesday.

Developers can use it to construct concrete and steel structures up to eight stories for about the same cost as wood-frame structures, he said. It can be used for multifamily housing, hotels, resorts or student housing.

The firm launched a company, Sustainable Living Innovations, that will sell the design technology. The architecture firm will do the design work for SLI. The other partners will build the projects if they provide competitive pricing.

It has applied to the city of Seattle for approval to construct mid- and high-rise buildings with the technology. Collins said such buildings would cost about 25 percent less than those built with conventional methods.

SLI has talked with developers of apartment and student housing projects in Seattle about using this technology, and is in final negotiations on two apartment projects — with 75 and 95 units — in Seattle.

“We should have a huge piece of the market,” Collins said. “There's nothing like this anywhere.” 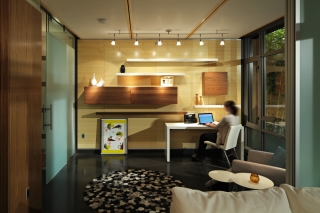 Photo by Doug Scott [enlarge]
The system can be used for multifamily housing, hotels, resorts or student housing.

The Eisen Group will handle sales on the East Coast and tweak the design to meet local conditions.

The approach meshes a kit-of-parts and modular construction to cut building time in half, Collins said.

Units are constructed like this: A concrete podium is poured. One top of that, separate concrete slabs are created. Then pre-fabricated steel is erected to form the structure. A slab with pre-finished roofing material is lifted up using internal hydraulic jacks and cables, and bolted to the steel frame.

The innards of the units — cabinets, appliances, fixtures, utility wall, demising wall, outside wall and window systems — are placed on the next slab, which is lifted up through the building to form the top floor. The slab is connected to the frame, the innards are installed and the process is repeated with each floor up to the eighth floor.

“Nothing in this building is structural,” said Collins. “The structure is all outside.”

Above the eighth floor, a different floor system will be used and lifted into place by a tower crane, which will also lift the apartment components.

The buildings will be constructed with a doughnut hole in the center. Hallways will be around the inside of the doughnut hole because that's where the structural framework is. The hallways will not be enclosed to avoid expensive life safety features.

Common areas will be in the doughnut hole.

The innards of the apartments are built off-site in controlled conditions by vendors at their factories. Substituting for interior walls are movable frosted glass pieces and dual-sided cabinets. The kitchen side of the cabinets will hold the refrigerator, pantry and shelf space. The bathroom side will hold a washer and dryer and shelves.

Also, windows are more expansive than in conventional buildings.

The designers eliminated the “wasted space” of the hallway, making the apartment 10 percent smaller but with the same living area as a conventional unit, Collins said.

Units will cost $95,000 to $150,000, including inside components, and be customized for each site. The height and length of units can be changed, but in general the width cannot.

Last fall, the partners built two prototype apartments in a Sodo warehouse. Vendors supplied items at cost or for free in the hopes of building a relationship with SLI, Collins said. “All of these people helped us on basically a handshake.”

SLI will offer a turnkey product at a fixed price, taking on the delivery risk itself, Collins said. “They'll never have a change order and we'll do it in half the time.”

Collins said the new technology's fundamental pieces are patent pending, but he said it meets Seattle building codes for construction of seven stories over a podium.

The technology could be used for office or lab buildings but would involve a different kit of parts, he said.

Collins said he expects this will change the building industry.

“I think it has far-reaching impact on design and construction because it does suggest that designers are going to have to design from kits of parts rather than from scratch, because we can't afford that,” he said. “I think the construction industry is going to have to get good at managing things that are not built by them.”

Some SLI vendors use union labor and some don't, but on-site construction will be union, Collins said. Since most wood-frame construction is non-union, he said this will open up a new market for union members.

Developers have been keen to find less expensive ways of building. In Europe, modular high-rises have been constructed. One developer is planning the world's tallest prefabricated steel structure, a 34-story tower, as part of the Atlantic Yards project in Brooklyn, N.Y., according to the New York Times.

John McIlwain, an Urban Land Institute senior fellow who studies housing trends, said the CollinsWoerman/SLI approach is new to him.

“It sounds as if they have come up with a very thoughtful integrated system,” he said. “I can't speak to whether it's better or worse or cheaper.”

The design is potentially attractive, but the inability to change the unit width and the lack of interior walls and hallways could be limitations, he said. “It depends on what you like for design.”

Modular construction is used by builders in varying degrees, he said. “I've even seen a modular jail cell in Mexico City.”

Modular saves money because it saves time, but the savings from building in a factory are lost in shipping costs, he said. If SLI uses local vendors, it has an advantage, he said.

He also said building without using a big crane is “fairly innovative.”

“It's good that these people have come up with what they have,” he said. “Let's see how it works. The advantage of modular is it takes less time. Whether this is the fastest, experience will determine.”

Robert Holmes, formerly CEO and president of Harbor Properties and of IntraWest in the United States, has been an advisor to the SLI project.

He said the new technology offers a tremendous advantage because of speed. It's high quality, mitigates developers' risk, lends itself to urban infill, and offers concrete and steel for wood-frame prices, but it may take awhile to get used to.

“My sense is that there's a period of time where you have to spend some time to get your head around it.”