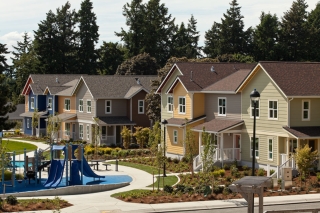 Seola Gardens replaces a 46-year-old public housing complex on the same site that was operated by the housing authority.

The authority said the community is being redeveloped to serve a mix of incomes. When completed in 2018, it will have 177 units of subsidized rental housing and up to 107 homes for sale.

Seola Gardens will include Providence Joseph House, a 65-unit mid-rise apartment complex for seniors and people with disabilities. Providence Health & Services will operate the complex, which is expected to open next year.

Seola Gardens has sustainable elements such as rain gardens and a pond to clean surface water before it leaves the site. Units in Zephyr take advantage of natural light, are energy-efficient and wired for solar.

“Seola Gardens is about the renaissance of a community,” King County Executive Dow Constantine said in a press release. “Between our King County Department Development and Environmental Services and the Housing Authority, we have designed sustainable housing that costs less to operate and creates healthier living environments for families. The contrast between the old public housing ‘project' and the new community of Seola Gardens is striking.”

The authority said Seola Gardens is part of its plan to help revitalize White Center, one of the poorest areas in King County. In the last decade, the authority has invested about $300 million in private and public funds for housing and community services in White Center.