Making a new home for history on Lake Union

By SAM MILLER
LMN Architects
The historic armory building at Lake Union Park has been repurposed as the new home of the Museum of History & Industry.

The 54,000-square-foot structure was constructed in 1942 and now houses the museum’s extensive collection of historic photographs, costumes and objects representing life in the Northwest.

LMN worked closely with MOHAI and its exhibit team to develop a design that meets the needs of the museum. Original historic features were restored and new building elements were thoughtfully incorporated. Safety, seismic, accessibility and technology improvements were made to support contemporary exhibit and event activities. 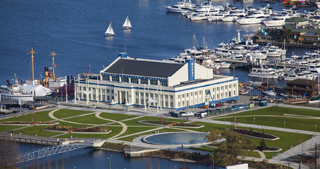 Photos courtesy of LMN Architects [enlarge]
A mechanical well was built on the low roof to hide new equipment, including seven air-handling units and a chiller plant. The equipment was placed where it wouldn’t block the clerestory windows.

The armory is listed on the National Register of Historic Places and is a Seattle historic landmark. One of the original architects for the building was B. Marcus Priteca, a well-known designer of West Coast theaters, including the Paramount Theatre in Seattle.

The building’s significant historic features include a large drill hall in the center of the building, a nautical-themed west entry and its prominence on the Lake Union waterfront. The adaptive reuse of the armory as a museum required the careful integration of new elements while preserving its noteworthy original features.

The building’s exterior was left largely unchanged with the exception of new rooftop mechanical equipment and the addition of a terrace to the west. Inside, a 1980s acoustic tile ceiling in the drill hall was removed to expose the fir roof decking. A new elevator and stair were detailed with steel and glass to complement the historic concrete structure of the original building.

The original building drawings showed large eagle light fixtures flanking the outside of the main entry. These fixtures were never installed. MOHAI agreed to build replica fixtures based on the original details, and now these 4.5-foot cast eagles grace either side of the building entry.

Seven new air-handling units and a chiller plant are required to support the museum’s use. There was no obvious place to locate this equipment; the building is located on a pier, so there is no basement. All four sides of the building are highly visible and surrounded by Lake Union Park, preventing the location of any of the equipment outside the building.

[enlarge]
New eagle-shaped light fixtures flank the entrance. The design is based on plans from the original building that were never installed.

Since the goal was to maximize usable space within the building, the roof became the only viable location for the equipment. A mechanical well was created on the low roof for this purpose.

Careful study was required to ensure that the equipment was screened from view and not shading the drill hall clerestory windows. In addition, large amounts of duct work and electrical conduit were strategically routed to minimize their impact on the public spaces.

The successful renovation of the armory was only half the story. Exhibit design is a critical component which requires close collaboration with an integrated team.

Ann Farrington led the exhibit design effort for MOHAI, meeting regularly with the building design team to ensure all the museum’s needs were addressed.

Structural improvements were made where large and heavy objects would be located. Lighting systems were specified to provide flexibility as exhibits are changed.

One of the biggest challenges the building presented was the low ceiling in the galleries on the second floor. Portions of the roof structure in these areas were raised to add some height. The changes were balanced with the need to conceal the mechanical equipment above.

MOHAI’s decision to put a history museum in a historic building was not just a great idea from a curatorial perspective, it was also a fundamentally sustainable choice.

This achievement was due, in part, to the strategies incorporated to reduce the use of lighting power in excess of 35 percent. Daylighting simulations allowed the design team to maximize access to natural light and views while protecting historic artifacts. LED fixtures are used for exhibit lighting.

The project achieved 15 out of 17 LEED points for indoor-environment quality by using low-emitting materials, which serve to protect the museum’s collection.

Other key sustainable design features include:

• Access to public transportation, including the South Lake Union Streetcar

• Use of local and recycled materials, and construction-waste management

As in all complex projects, the success of the armory renovation is the result of a great collaborative effort by MOHAI, LMN, Sellen Construction, the Seneca Group and the entire design and construction team.

Sam Miller, a partner at LMN, leads its cultural and education projects and its design technology and sustainable design initiatives.