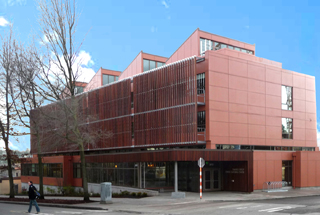 Photos courtesy of Rolluda Architects [enlarge]
The center is a place where underrepresented students can gather, get involved in programs and build leadership skills.

Samuel Cameron spent time studying and hanging out at the University of Washington's Ethnic Cultural Center when he was a student at the Seattle campus in the 1970s.

That helped on his most recent project: designing a replacement for the center at Brooklyn Avenue Northeast and Northeast 40th Street. Cameron is an architect for Rolluda Architects in Seattle.

The three-story, 26,000-square-foot building is named the Samuel E. Kelly Ethnic Cultural Center, in honor of the university's first vice president for minority affairs. It will be dedicated at 5 p.m. Thursday.

The center is a place where underrepresented students can gather, get involved in programs, build leadership skills, and expose others on the campus to ethnic and cultural issues.

Cameron, an African American and Rolluda principal, was studying architecture when he used the center. 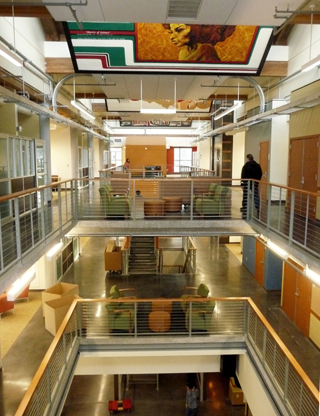 [enlarge]
The design encourages people to meet and talk, so stairs and elevators are at the rear of the building.

“It was good for me to be able to interact with other students, doing homework and doing projects together,” he said.

It also provided a place to acclimate yourself “before you were ready” to venture into the larger social center of the campus, the Husky Union Building, he said.

The new facility replaces a 1970 building — one of the first such student centers in the United States.

Cameron, the project manager, said the new center is designed to encourage people to talk to each other. So the circulation system is at the rear of the building.

“We wanted people to come in and see other people and not disappear into a stairwell or elevator without interacting with other people.”

Other Rolluda staff on the project team also attended the UW and used the ethnic cultural center, and that helped with the new design. Alex Rolluda, principal in charge, was at the UW in the 1980s, and Sam McPhetres, an intern designer, was there in the 1990s. Both are Asian American. McPhetres has since left the firm.

The designers also relied extensively on the ideas of students who use it now — and among their suggestions was lots of gathering space, Cameron said.

In the early days, students of different races “disappeared into their own corners,” he said. Students now don't want that: “They wanted the building designed so that they could mingle.”

The new building also has an open atrium, offices, a kitchen, computer lab, conference rooms, study areas, and spaces where students can do things such as practice native dances.

The center has lots of natural light, energy-efficient mechanical and electrical systems, and some operable windows. The team is seeking LEED gold certification.

The building has blank walls and areas where people can hang banners and artwork.

“We didn't go in and try to interpret cultures,” Cameron said. “We wanted them to come in and add that themselves.”

The university also preserved an important part of the building's history: 25 murals ranging from a few feet square to more than 19 by 25 feet.

The largest four are commissioned work painted by students in the 1970s on wallboard attached to the stud structure of existing walls. The murals represent the groups for which the original building was designed.

To save the murals, the walls were braced so the murals could be cut out. The murals were restored off-site and now hang from light monitors attached to the underside of the roof structure. The other murals are incorporated into the building.

The $15 million project was funded by student fees, Cameron said.

(Editor's note: This article has been changed to correct the names of the lighting and acoustical consultants.)