Local group pushing to expand use of cross laminated timber in the U.S. 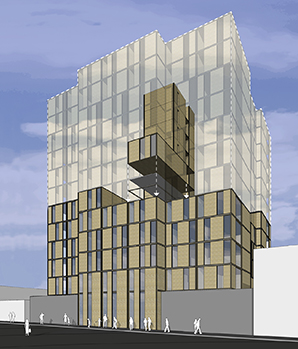 Image courtesy of Weber Thompson [enlarge]
The darker area in this drawing shows how tall wood-frame buildings can go in Seattle today. Some local design professionals say more developers would build up to 125 feet (shown in the lighter area) if the city allows CLT construction.

Seattle allows residential buildings of between eight and 12 stories, but a group of local design professionals say the city is not getting as many as it could because the returns don't usually justify the costs.

They say that's because, structures that height must be built with non-combustible materials, usually post-tension concrete. That costs more than the wood-frames typically used in shorter buildings, and more building systems and life safety features are required.

Developers who build tall towers can spread the added costs over more units, and renters tend to pay a premium for the views and luxury features of those buildings, the group says, while tenants in eight- to 12-story buildings generally won't.

For the last year, they have been studying an alternative: using cross-laminated timber to build housing in eight- to 12-story buildings in Seattle.

Cross-laminated timbers are layers of wood placed perpendicular to each other and glued together. They can be used to create structures that are more fire-resistant than typical wood-frame.

The group says CLT is a renewable material with a lower carbon footprint and is strong enough to be used in place of post-tension concrete for taller buildings.

CLT was developed in Europe in the 1990s and is used there mostly for low-rise structures, partly because that's what building codes allow. In North America it has been used for low-rise buildings in British Columbia and Quebec. In the U.S., it's rarely used.

Angus says his group did a case study that shows an eight- to 12-story residential building constructed with CLT modular units on a concrete base would cost slightly less than post-tension concrete — considering materials, labor and equipment.

Most of the savings come because the walls, floor and ceiling of the modular units form the primary structure. Also, the walls don't necessarily need to painted or sheathed in dry wall.

“You're not just using a new material for the heck of it,” says Clemens. “The unit can be the structure.”

On top of that, the developer also saves 4.5 months in construction time because the factory-made units can be erected quickly on site, Angus says.

Blomgren has been working to get people in Seattle talking about CLT, a product his firm has been studying for use internationally. He and Joe Mayo, an associate with the Seattle architecture firm Mahlum, have lobbied the city to study allowing CLT to be used for taller buildings.

Bryan Stevens, a spokesman for the city's Department of Planning and Development, says not a lot of Seattle is zoned for construction to 125 feet, but there have been several buildings constructed in these zones recently in Belltown, South Lake Union and near the Olympic Sculpture Park. More are in the pipeline.

Because of the sustainability of CLT, the city will set up a committee in May to look at it. Part of the focus will be on allowing its use for high-rises, with some exceptions.

In Seattle, a building becomes a high-rise when the highest occupied floor is more than 75 feet above street level.

Jonathan Siu, principal engineer and building official with DPD, says, “We don't have enough information (about CLT) to say yay or nay. This material is very new.”

He says the national building code requires high-rises to be constructed of either steel or concrete, or both.

“One of the things we need to figure out is what's the reason for the requirement for non-combustible materials,” Siu says. “Is it something that is just tradition or is there some fire reason for it?”

The question is: “Do you want material that burns ... in a building that's a high-rise?” says Siu.

Seismic safety is another consideration given that no CLT high-rises have been built in earthquake country, he says. “There are still a lot of questions out there that need research on the seismic side.”

But even if the city approves, local proponents know CLT won't likely take off without a developer, nonprofit or public entity willing to try something new.

CLT is gaining some traction elsewhere.

In London, Waugh Thistleton Architects designed a nine-story wood apartment building that was completed in 2009. It was constructed from cross-laminated timber panels from the first floor up. The load-bearing walls, floor slabs, and stair and elevator cores were built with timber.

Blomgren says Seattle likely will take a “walk-before-you-run approach” to CLT by approving it for floor plates in the next year or so. “Building officials are going to get comfortable with approving it in pieces,” he says.

To address some fire concerns, fire safety elements equivalent to those in post-tension concrete buildings could be developed for 8- to 12-story buildings that use CLT, he says.

Blomgren says Arup recently got a grant from the National Fire Protection Association to study the fire safety challenges of tall wood structures.

There are only two manufacturers of CLT in North America — both in Canada — but Blomgren says he expects prices to fall when there are more.

Mayo, with Mahlum, studied wood construction in other countries using an AIA Seattle travel scholarship. He says it makes sense to take advantage of the 85- to 125-foot zoning to increase density in Seattle.

Mahlum has been working on a report about the financial case for using cross laminated timber to build taller than what the code now allows, he says. That report should be out in the next month or so.

Mayo says while North American production of CLT is now limited, there could be production in the U.S., and there's an argument that using a local material is “going back to a more honest architecture.”

However, he says, academic studies are needed on using CLT in seismic zones, such as Seattle.

“It's a new material and more information needs to be gathered on it before we can really move into a 10-story zone,” he says.

Developer Patrick Foley of Seattle's Lake Union Partners says he thinks developers locally tend not to build in the eight- to 12-story range because the added costs can't be passed on to tenants. “You can't charge them for structural components they can't see.”

Foley's firm is doing apartments here and in Portland, and says he is interested in CLT, “if we can make it work.”

Lake Union Partners cares about design, he says, so it likes that CLT offers the chance for exposed wood walls. “There's value in that for us.”

But he says the cost of CLT would have to get closer to wood-frame to make it work. “They're going to have to demonstrate that this is as easy to build as wood-frame and show us some savings in the (construction) schedule and drive the costs down,” he says.

Locally architects, engineers and developers have been looking at new methods for creating multifamily buildings, and a few developers say they plan to build apartments using modular components.

Bellevue developer Wallace Properties is working with a division of CollinsWoerman on a Seattle apartment project that will blend a “kit of parts” approach with modular construction.